There’s been no shortage of criticism of Donald Trump and his response to, well, pretty much everything.

But few people have put it quite so well – or succinctly – as this man, an American priest called Robert Hendrickson who had this to say about the so-called president on Twitter.

In particular, about the moment Trump posed holding a president in front of a church, the area having been cleared not long before of peaceful protestors by law enforcement officials using tear gas and rubber bullets. 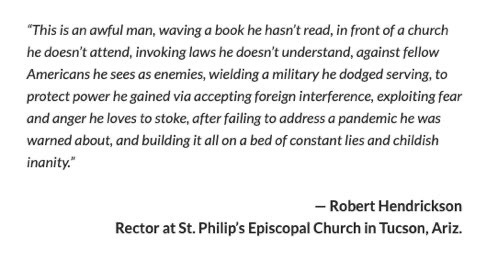 ‘Couldn’t put it better,’ said actor @StephenMangan who was one of many, many people to share his words on Twitter.

Not everyone agreed with him, naturally.

“You’re a repulsive left wing stooge who made me leave the Epiacopal Church 30 years ago. Take your demon liberalism and shove it! You should move to Haiti!”

“Thank you for saying things that I’ve had a hard time saying.”

God grant me the strength not to engage trolls, the kindness to engage with honest disagreement, and the wisdom to know the difference.