A man with the Twitter name Bizarre Lazar has been conducting an interesting social experiment.

Since the end of May, on a second account he has called @SuspendThePres, he has been tweeting what Donald Trump tweets to see how Twitter would react. 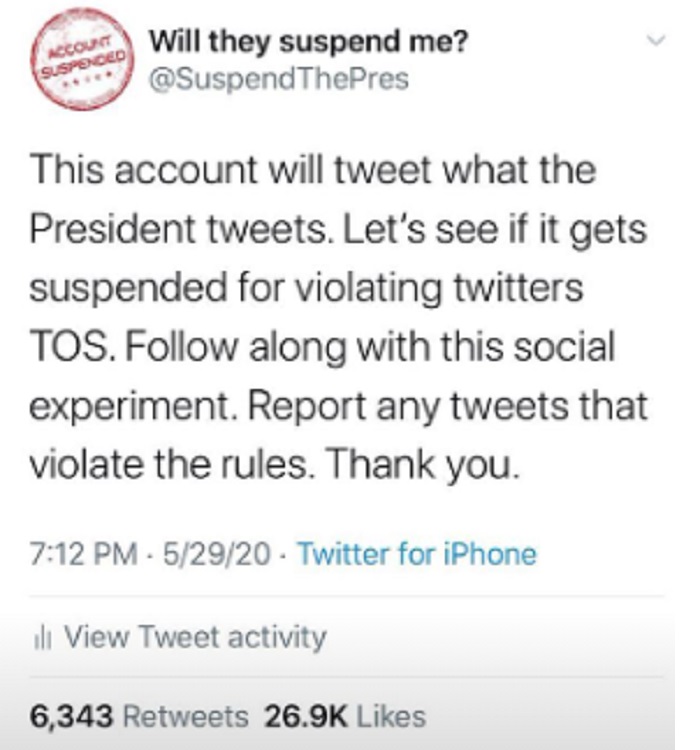 He began with one of Trump’s tweets Twitter had hidden from view for violating their rules about glorifying violence. 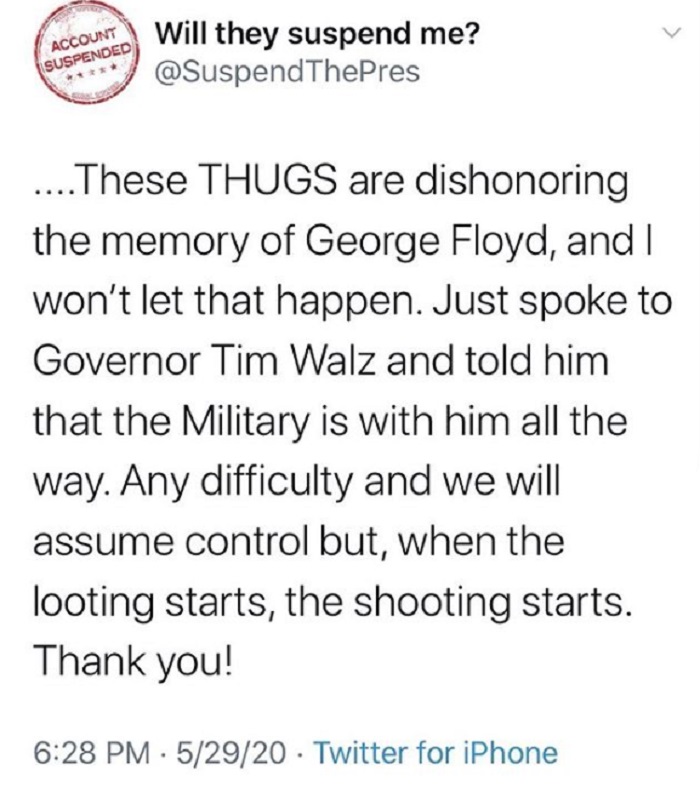 We won’t share all of them, but here are a couple more, just so you can see what’s peppered across the President’s account. 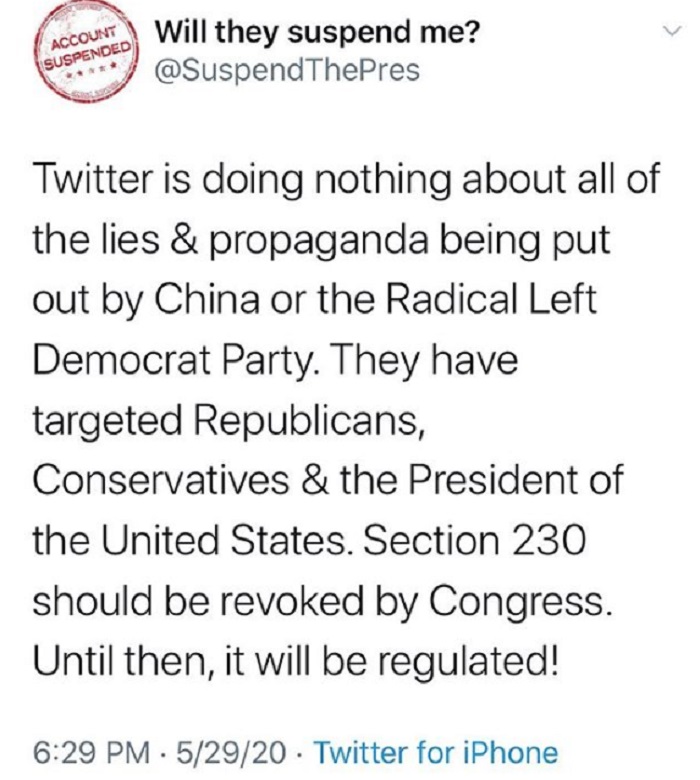 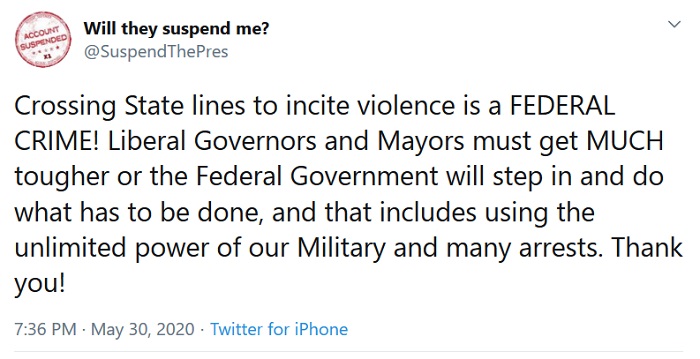 On the 1st of June, he tweeted this

Experiment Update – Well it finally happened. Took longer than expected. 12 hour suspension and had to delete the offending tweet. Here’s the screenshots @suspendthepres. Will post to the account when suspension is lifted. pic.twitter.com/wvKV9HDKBn 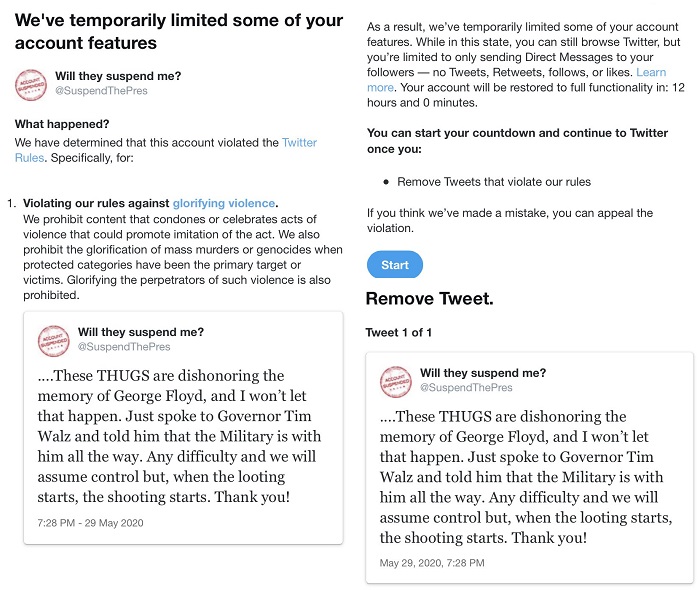 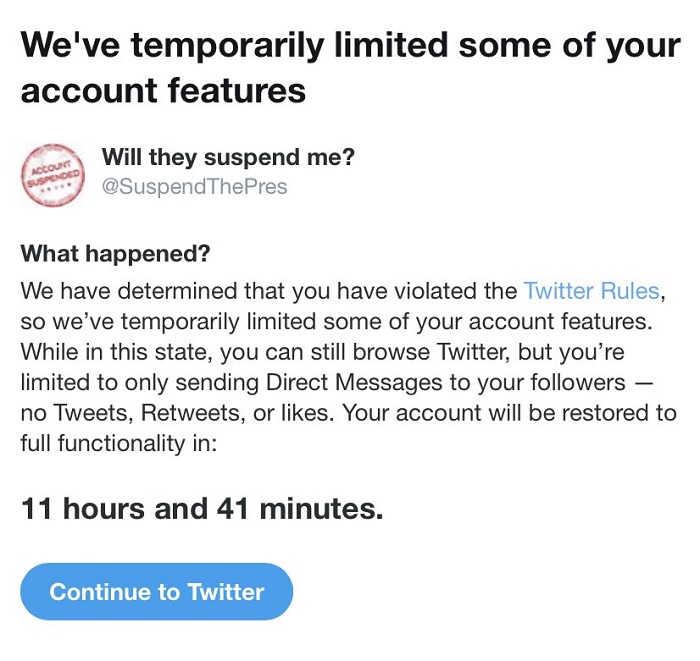 In two days, the exact same tweet that had merely been covered up when Trump posted it earned @suspendthepres a 12-hour suspension.

The experiment was widely shared, picking up reactions like these.

This is the guy who, as an experiment, tweets exactly what Trump tweets to see what @twitter do about it.

One rule for them & another for the rest of us? I for one am shocked. Shocked I tell you! 😏 https://t.co/5vmmjvdmco

Hope you've got a LOT of free time. This is gonna be a full time job.

Well, it's one rule for us, another for them, even when you repost verbatim stuff that the orange danger posts. What say @jack @Twitter @TwitterSupport https://t.co/hEJ3NqhfHd

Former Republican Tom Nichols, despite being far from a fan of Trump, thought Twitter had got it right by not suspending the President’s account.

“If a Tweet from a world leader does violate the Twitter Rules but there is a clear public interest value to keeping the Tweet on the service, we may place it behind a notice that provides context about the violation and allows people to click through should they wish to see the content.”

They added a list of types of infringement which would result in action – unspecified – against the tweeter, regardless of their status.

Clear and direct threats of violence against an individual;

Posting private information, such as a home address or non-public personal phone number;

Posting or sharing intimate photos or videos of someone that were produced or distributed without their consent;

Bizarre Lazar intends to continue the study to see what else will get him suspended, but in the meantime, there is an unexpected bonus to what he’s doing.

Thanks for giving me a way to "monitor" his tweets without having to "follow" him. Can't stomach that.