We try not to bother ourselves too much with far-right YouTuber Paul Joseph Watson so let’s keep it brief.

Watson had a meltdown on Twitter after he found out he was blocked by Piers Morgan, although we’re not sure ‘meltdown’ quite does it justice. 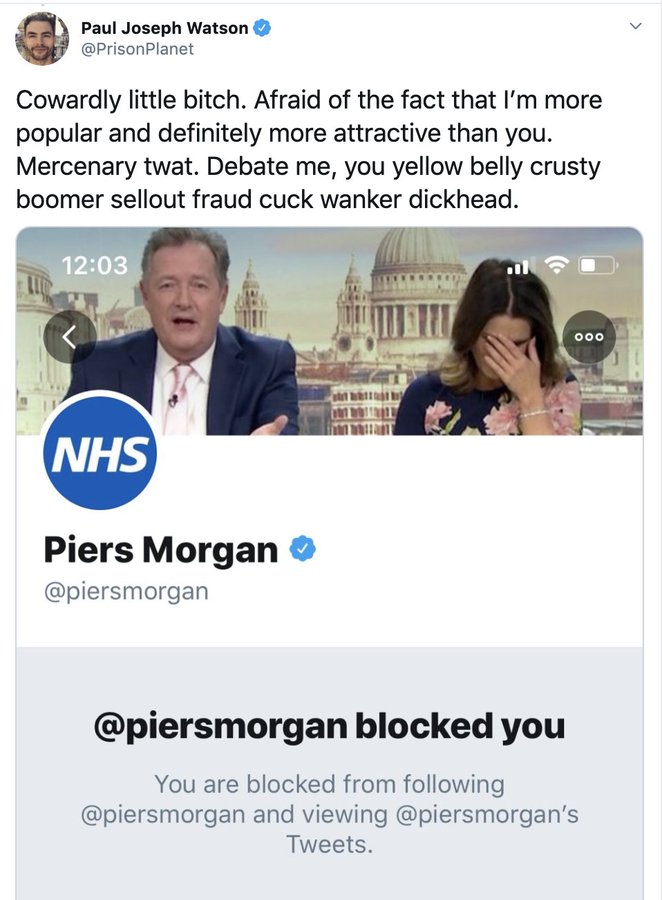 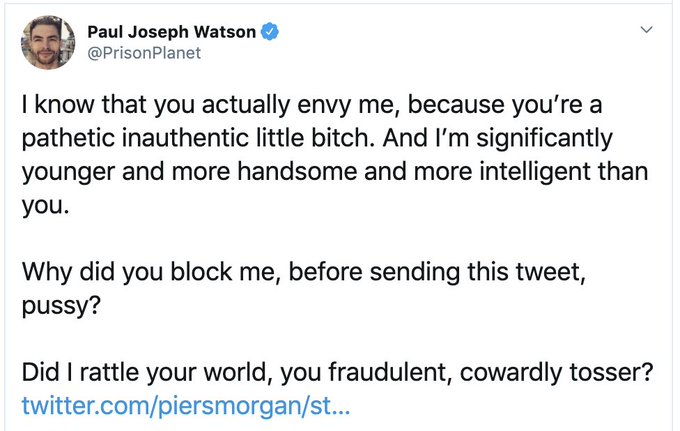 And there was lots more where that came from, there really was. It prompted lots of responses on Twitter from people like this.

Paul Joseph Watson having a very public breakdown because Piers Morgan blocked him is the highlight of my quarantine so far, tbh. pic.twitter.com/lQt4stpSXr

Seems incredible that Paul Joseph Watson is dealing with lockdown worse than anyone, given that he never left his mum’s house anyway.

Just seen Paul Joseph Watson's epic (but concerning) meltdown on twitter dot com and am praying for him, the basement he dwells in, his wall map, and that he respects his nan when she calls him up for supper. Here if you want to chat, Prison Paul. Oh that's right, you blocked me.

But no-one said it better than Morgan himself.

Hi Paul,
You’re a repulsive, racist, far-right, Muslim-hating, conspiracy theorist imbecile who works for a website that says Sandy Hook was invented.
Given all this, I am relaxed about your dislike for me. In fact, I crave your disapproval. Now f*ck off. https://t.co/8lLIpsgbwu

It had the entire internet cheering. Except some people were still struggling to get to grips with the idea of Piers Morgan as the good guy.

This is like Godzilla vs Mothra, when the franchise began to pivot the central dinosaur from terrorising destructive force to loveable defender of humanity, against even shittier monsters. https://t.co/sbO09Ev3km

People are sharing the ‘sly digs’ they’ve suffered and these are subtly, brutally, devastating