There’s lots going on in the world right now as you’re probably aware, but really today there is only one story in town.

And it’s not coronavirus. It’s this. 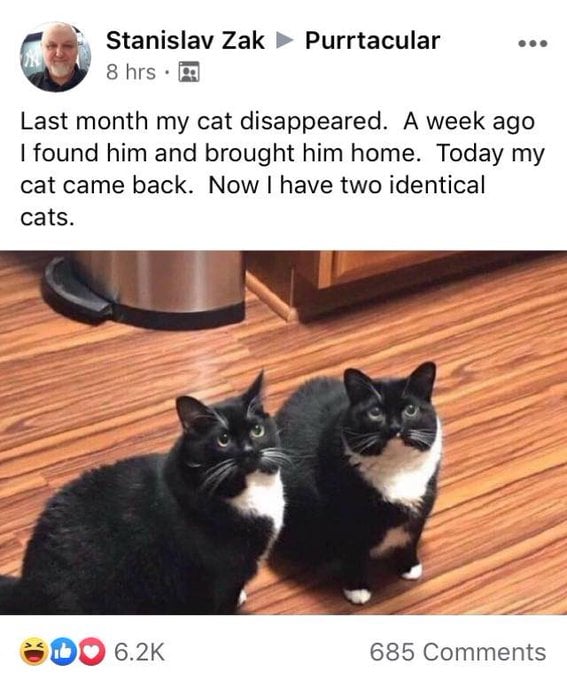 It went viral after it was shared online by people including the great @JimMFelton who said: ‘A friend sent me this and now I can’t think of anything else.’

And it prompted lots of great replies, from theories to jokes to people’s own stories of something similar. Here are our favourites.

Is he sure he didn’t always have two cats and was unaware until now?

The start of exponential growth looks harmless enough, but in 10 weeks there will be 1024 of them.

We once buried the wrong cat

I am horrified, yet demand to know more. Did… did you ever find out whose cat you buried?

Driving home with parents. Spotted black & white cat lying in the road. My dad’s Like ‘oh God is that our cat?’. I saw a flash of fur but couldn’t look. My mum scoured the village to find my sister who was devastated and refused to come home. When she finally did, so did our cat

I have a similar issue, opened the door 6 months ago to let “my cat” in, she wasn’t “my cat”, she’s still here pic.twitter.com/jCXL4zLpkI

Feel sorry for the other owner.

"Last month a cat identical to mine appeared. A week ago he vanished. Today the other one left. Now I have no cats

I choose to think that these two families are constantly kidnapping the other family's cat when theirs disappears for a minute.

The replacement cat must have been so confused

They aren't identical. They're similar, but look at the chin markings. Guy can't recognise his own cat.

Dude my husband doesn’t notice if I go from black hair to blonde. Cut the man some slack.

I bet neither one are the original cat

Story: my Family had an orange american shorthair named Merlin. He got too old, as cats, do, and we had to bid him farewell for good. Less than a month after that, an i d e n t i c a l cat shows up on our back porch. So we let him in and start checking missing cat posters. (1/3)

My mom finds a missing cat poster and calls the family, and it turns out that their cat (Whose name was Peanut) went missing around the same time. But oddly enough, Peanut had been returned to them. We tried calling our mystery cat by that name and he becomes very friendly. (2/3)

So it turns out that Peanut's family had received an identical cat, and thought it was him, at the same time as Peanut, who was identical to Merlin, was chilling at our house. Mystery third cat was, according to them, mean as hell. Life is strange sometimes, huh (3/3)