Former UKIP MEP, Godfrey Bloom, is one of the most reliable characters on the British political scene, because he can always be relied upon to say and do outrageous things that show him to have some seriously outdated and unpleasant views.

The time he referred to women as sluts – in the original sense of being bad at housework – and said they should clean behind their fridges.

When he hit Michael Crick with a UKIP party conference brochure for asking why the people on it were all white.

Describing countries to which the UK sent aid as “Bongo Bongo Land.

As the government told people to stay away from pubs, clubs and restaurants, Bloom became the 17.4 millionth person to compare the fight against Covid-19 with World War II, when he made this comment. 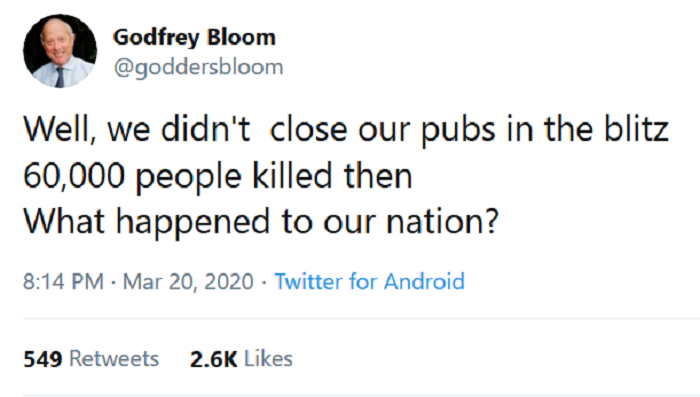 His not-so-hot take went down as well as you’d expect, and Twitter was flooded with reactions like these.

Yeah but you didn't catch bombs on a handrail, walk about with it for a week & then kill your Grandpa.
Ya fuckin' arsehole pic.twitter.com/vlcxfByriy

Hi. I’m a fucking Idiot. You may know me from comments like “I’m still going to the pub”, “we survived WW2” and “cough”.

Can't even go out for eight pints of bitter before going home to pass a life threatening respiratory disease onto an elderly relative now. Political correctness gone mad. https://t.co/nD5PALqA6h

It’s a virus, Gerald, not the Luftwaffe https://t.co/kyPEhdIjyG

Fuck it. Let's all have a giant group hug and kick each others faces in Leicester Square. As long as we sing Roll Out The Barrels we'll survive. https://t.co/iJKXN1aDCF

Godfrey Bloom managing to survive the Blitz by not being born for another 8 years. Clever.

Your tweet is shit and your head reminded me that I can’t get eggs, cheers.

*The Blitz predominantly happened at night.
*The Pubs weren't open.
*You couldn't catch a Doodlebug by sitting in a pub.
*You thick fuck. https://t.co/9C2o6ekxcg

Author and radio presenter, James O’Brien, was understandably bemused by the phenomenon of people defying calls for social distancing when the awful repercussions are clear.

He shared this depressing reflection.

Do we really need to explain to people that going to the pub in Britain in 1941 didn’t actually help Hitler kill British people? And that comparisons with pandemic response strategies are therefore not only very stupid but also very dangerous?

Apparently we do.
So we will.