Nick Harvey’s “Sue. You’re Shouting at Tea” is our favourite earworm of the year

The social media manager at Yorkshire Tea has been earning their weight in tea bags over the last few days, and that’s better than gold because you can’t drink a cup of gold with a Hobnob – other biscuits are available.

After they were savaged because Chancellor Rishi Sunak had posed alongside some of their tea, they tweeted about the need for more kindness on Twitter.

So it's been a rough weekend.

On Friday, the Chancellor shared a photo of our tea. Politicians do that sometimes (Jeremy Corbyn did it in 2017). We weren't asked or involved – and we said so the same day. Lots of people got angry with us all the same. pic.twitter.com/7uVmKDf7Jd

We've spent the last three days answering furious accusations and boycott calls. For some, our tea just being drunk by someone they don't like means it's forever tainted, and they've made sure we know it.

It's been pretty shocking to see the determination some have had to drag us into a political mudfight. But it's been lovely to see others speak up for us – we're so grateful to everyone who's done that in a civil way (and gutted to see some use it as a reason for more nastiness).

Speaking directly now, as the person who's been answering these tweets, I know it could have been much worse. It's easier to be on the receiving end of this as a brand than as an individual. There's more emotional distance and I've had a team to support me when it got a bit much.

But for anyone about to vent their rage online, even to a company – please remember there's a human on the other end of it, and try to be kind.

They received a lot of praise for the thread – like this:

Keep on keeping on. The way you’ve handled this has been absolutely textbook. Social media ‘gurus’ will have screenshots of the whole thing already loaded onto their PowerPoints showing what grace under pressure really means.

But some people weren’t convinced, and someone named Sue had a few things to say. 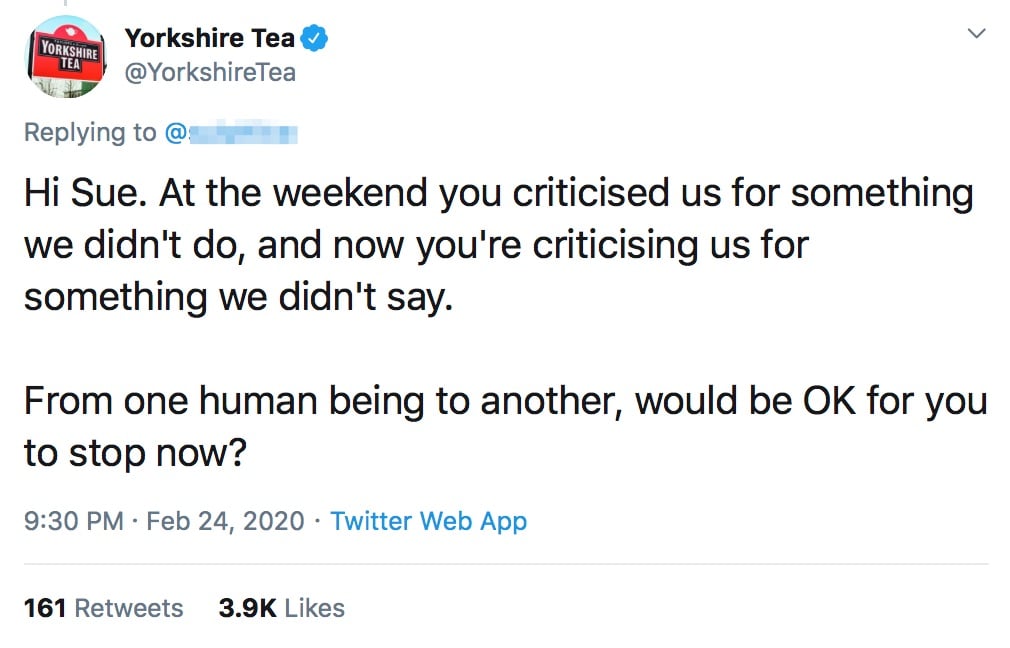 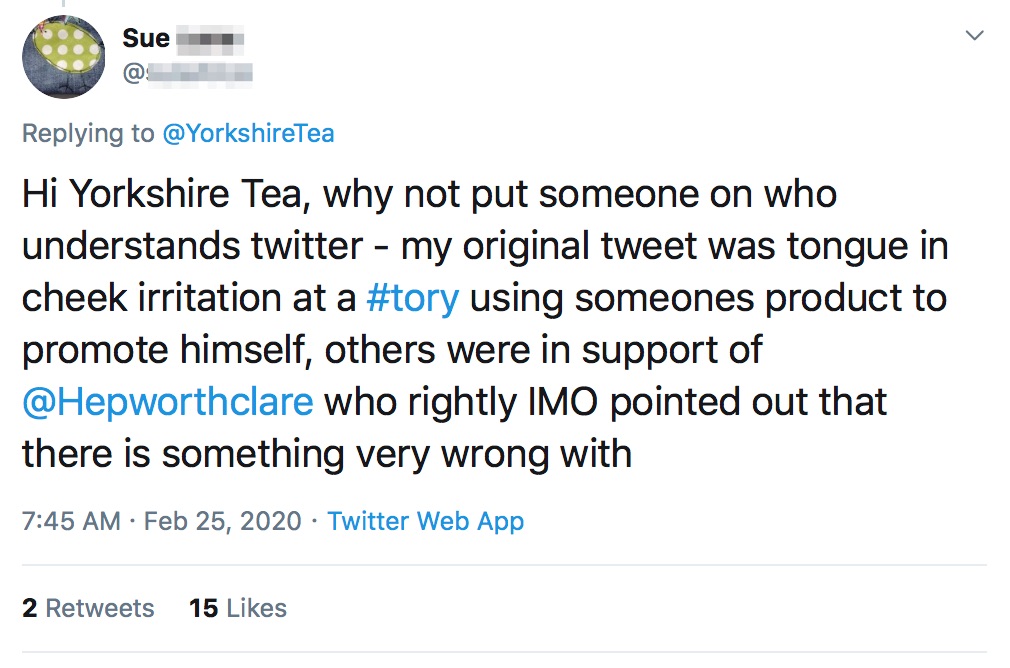 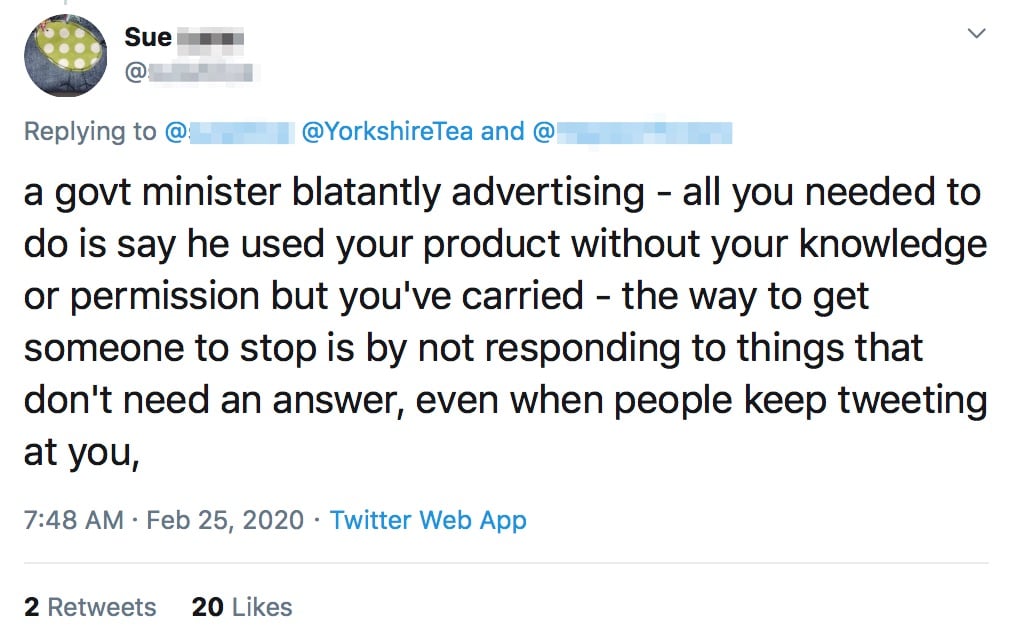 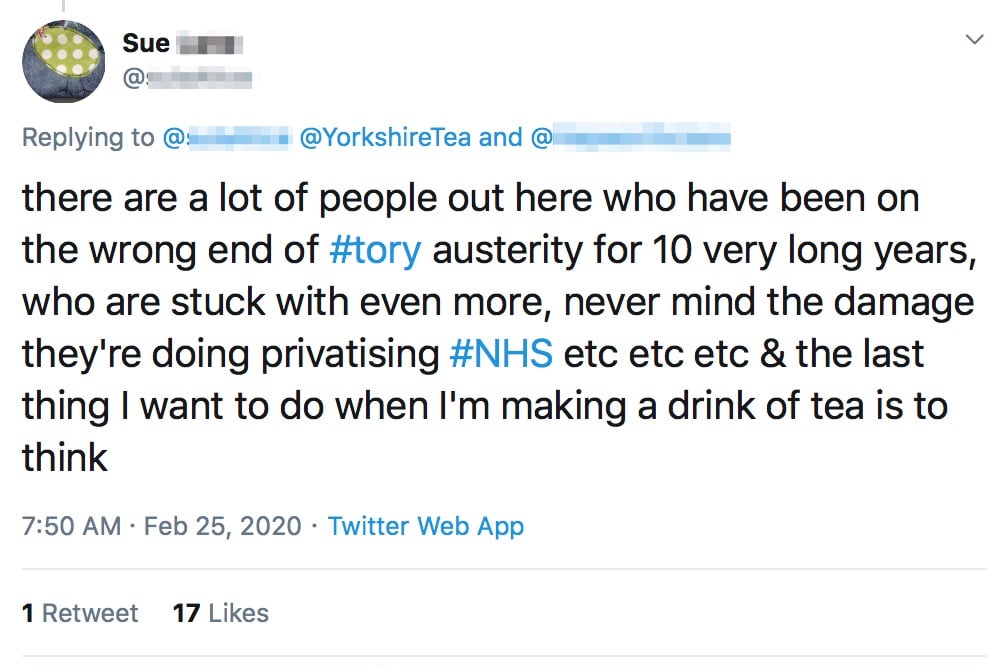 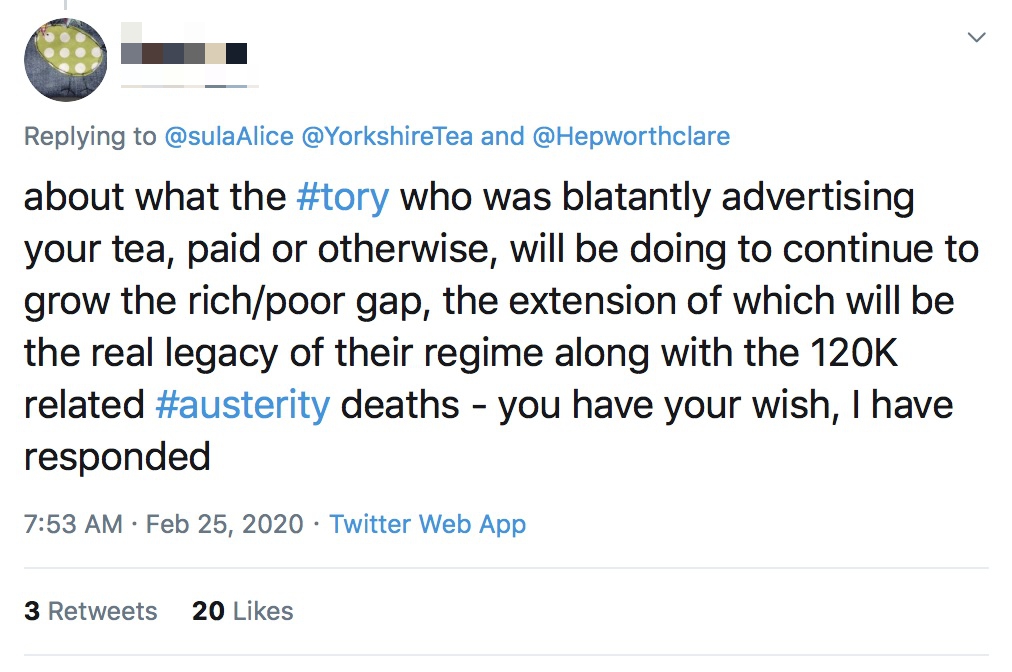 Yorkshire Tea’s response trended on Twitter for hours, such was its understated brilliance. 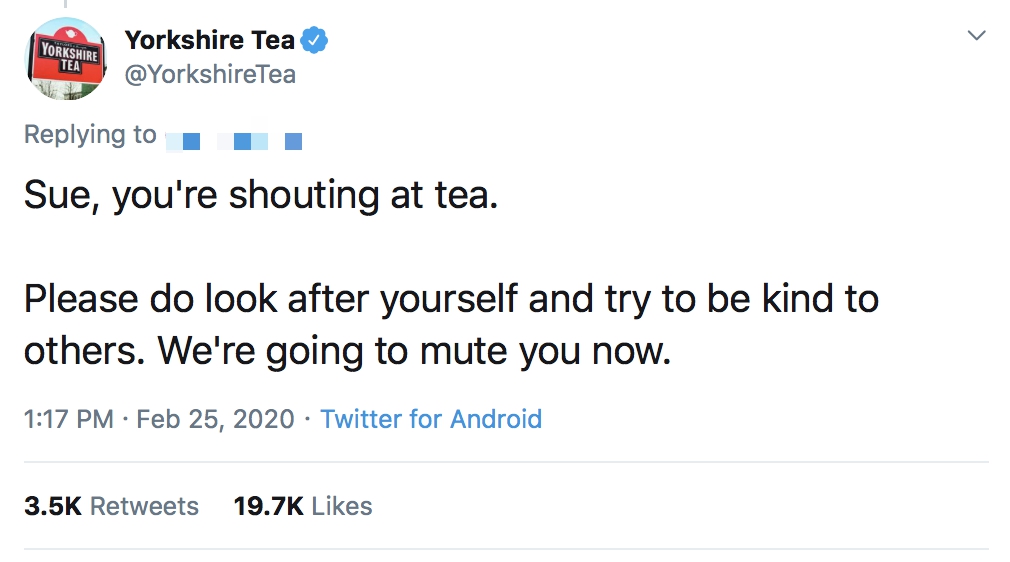 The phrase “Sue, you’re shouting at tea.” seemed to achieve a life of its own and become a symbol for how hard some people will try to start an argument online.

Now, its achieved something more than a life of its own – it has become a catchy little song by composer Nick Harvey, and we warn you – it’s an earworm.

Here’s what people have been saying about the ditty.

I shouted at a poor quality bacon roll this morning. Just you wait until my piano lessons really get going.

Juliet Borlase had a thought …

And here it is!! The UK Eurovision entry!!! @bbceurovision https://t.co/fgEHhOtdUN

It has “winner” written all over it.