A Brexiteer called Colin found himself going viral on Twitter today for reasons he may not have expected (assuming it’s not a parody, which would explain everything).

Colin Browning wasn’t happy with the long queues at Amsterdam’s Schiphol airport and had this to say about it. 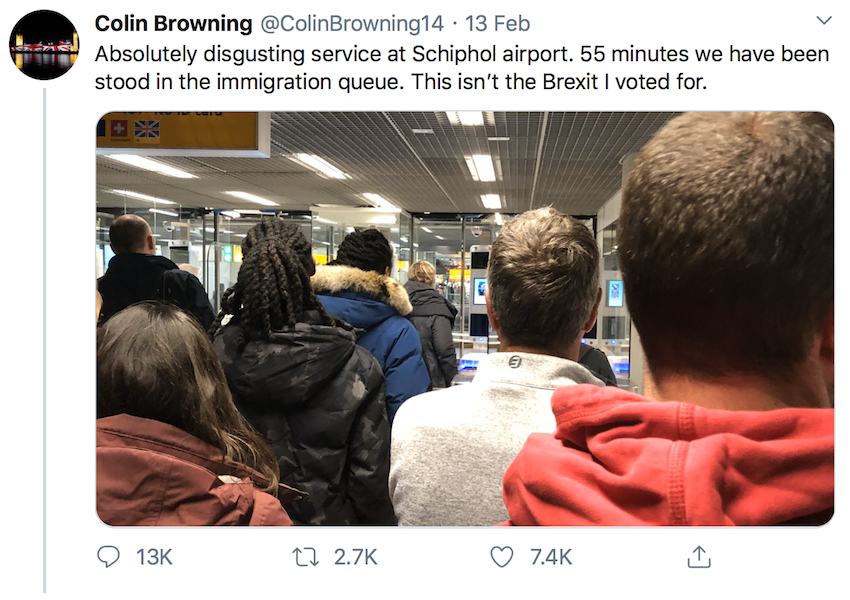 Colin, who describes himself as one of the 17.4 million people who voted for Brexit, said he had to wait for nearly an hour before his passport was checked.

When someone else on Twitter suggested he got exactly what he voted for, Colin wasn’t having any of it.

You've got what you voted for, enjoy!

I didn’t vote to stand in a queue for over an hour why some jobsworth checks our passports. I spent more time at immigration than I did in the air getting to my destination.

And here are our favourite things people had to say about it.

An absolute classic of the “people who wanted out of the EU losing their shit about the consequences of leaving the EU” genre. Just perfect.

Oh god please tell me this is a parody and you’re not actually this dumb.

Maybe you should just believe in Brexit more.

I admit there were a lot of things you couldn’t possibly have known before the referendum, but this isn’t one of them. This we knew.

And compared to what’s coming, this is just a minor inconvenience.

James O’Brien has a message for Remainers ridiculing Brexiter Colin over his social media post: “Go after the people who fooled them, not the people who got fooled.”@mrjamesob | #Colin | #Brexithttps://t.co/Zk1XxHuo5j