Here’s a tale to warm the heart, the story of a Russian guy who thought he’d play a bank at its own game. 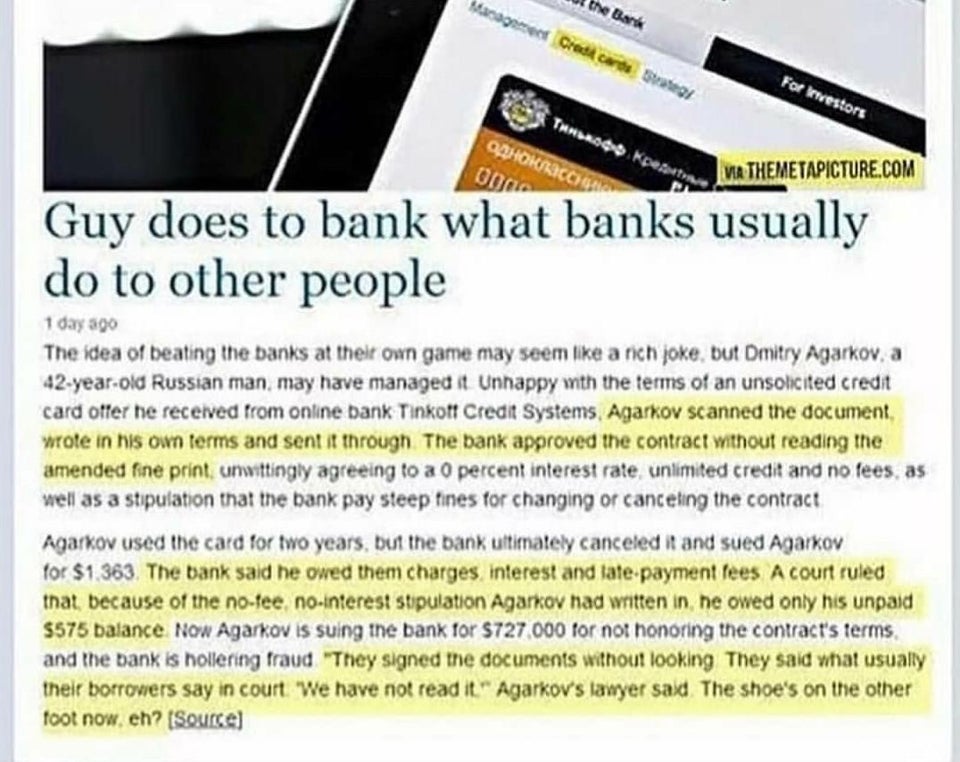 The idea of beating the banks at their own game may seem like a rich joke, but Dmitry Agarkov, a 42 y/o Russian man, may have managed it. Unhappy with the terms of an unsolicited credit card offer he received from online bank Tinkoff Credit Systems, Agarkov scanned he document, wrote in his own terms and sent it through.

The bank approved the contract without reading the amended fine print, unwittingly agreeing to a 0 per cent interest rate, unlimited credit and no fees, as well as a stipulation that the bank pay steep fines for changing or cancelling the contract.

Agarkov used the card for two years, but the bank ultimately cancelled it and sued Agarkov for $1,363. The bank said he owed them charges, interest and late payment fees. A court ruled that, because of the no-fee, no interest stipulation Agarkov had written in, he owed only his unpaid $575 balance. Now Agarkov is suing the bank for $727,000 for not honouring the contract’s terms and the bank is hollering fraud.

‘They signed the documents without looking. They said what usually their borrowers say in court: “We have not read it.”’ Agarkov’s lawyer said.

If we all do the same thing it’s bound to work out for us too, right?

The story went viral on Reddit after it was shared by christanner913 and here are a few o the things people said about it.

DrBear33: ‘I like how the lawyer for the guy was basically like “not fun is it cock knuckle ?”’

Purpluss: ‘Amazing to con a business that is essentially built on making money off other people not being able to pay off their loans. Still, making enemies with a bank could be a slippery slope and id be way too much of a pussy to do this. Mad kudos to this guy for fully committing though.’

painfool: ‘I personally think we should all start doing this. Don’t get me wrong, I don’t think for a second that the banks will fall for it….. But just imagine all the man hours they’d have to pay their employees to constantly have to read every contract (like they expect their customers to do, despite never providing them ample time or support to do it)….
As a former banker, this idea fills me with glee.

‘(edit: everyone telling me all of the ways this won’t work, did you not see where I said “Don’t get me wrong, I don’t think for a second that the banks will fall for ^it…..”?)

‘Edit 2:. In case it needs saying – don’t actually do this. This was just supposed to be a silly pseudo-cathartic imagined scenario. Do not take this as actual advice.’