Experts – those people the Leave campaign had had enough of – agree that divisions in UK society have broadened since the EU referendum. We’d say “Quelle surprise!” but French has probably been outlawed since the general election.

Because he’s obviously been told to by advisers, Boris Johnson used his New Year message to reach out to Remainers, which would be terrifying if literal, but was thankfully just metaphorical.

In case you missed it. 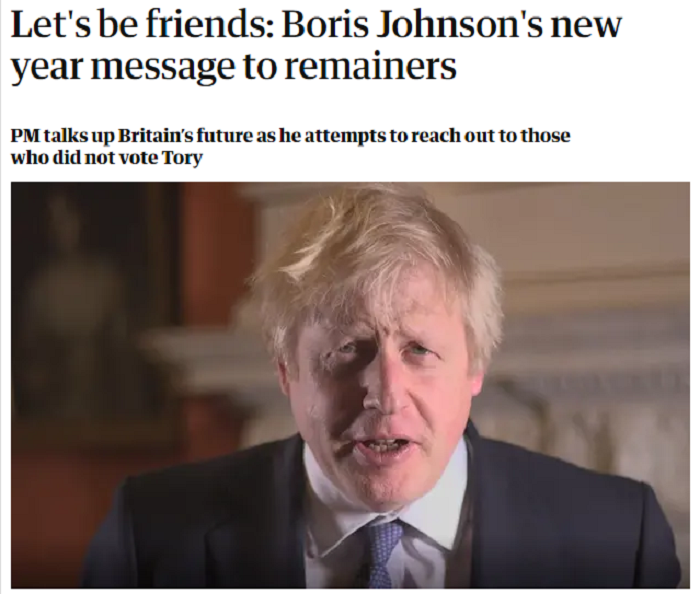 I've always found that the best way to make friends with someone is to continually lie to them, drag their country down the drain to serve my personal ambition and ruin their children's future. xxhttps://t.co/C0gxLx58Ov

Start 2020 by publishing the Russian Interference Report, if you want to be trusted.

It’s a No from me.https://t.co/9MsxSUKPbY

You're not my friend. Nor have you ever acted like my equal. And you're certainly not my PM. So stuff your bloody Brexit up your getnitdun, Johnson.https://t.co/CX5K5FlfB5

I don't lie down with cheats and shit-weasels Prime Minister. Jog the f*ck on.

My friends don't lie to me. They don't call me a traitor. They don't deprive me of my rights, attempt to curtail my democracy, intimidate my foreign colleagues, or walk out on the mothers of their multiple unacknowledged children.

My New Year’s message to Johnson:

There is no fucking way I’m uniting behind you and your fucking awful Brexit. You relied on dividing us and whipping up a nativist, populist culture war to get your way and you don’t get to ‘be friends’ now that doesn’t suit you. Fuck off.

"Let us be friends" is what child groomers say after long periods of abuse and gaslighting.

Curse your 2020, you priapic haystack.https://t.co/kvZ7dwjDnW

Get, and I cannot stress this enough, tae fuck. pic.twitter.com/haVSUlLTnP

What’s that in Latin?

next story
Breaking News: This news reporter speaks six different languages and he went viral because it really is next level stuff