Stupid customer of the week

In the first of an occasional series, it’s time for … stupid customer of the week.

‘Thats not how genetics works,’ says W1SC0 over on Reddit, and we’re pretty sure he’s right. 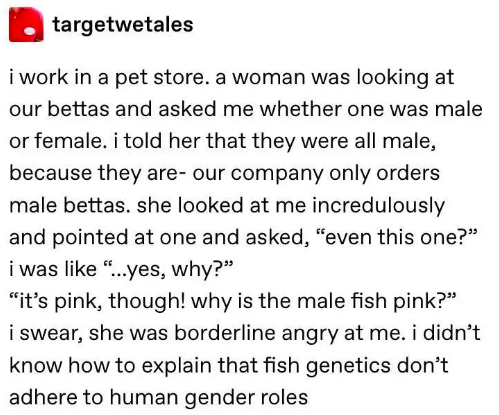 ‘Wait till she hears about flamingos,’ said Moztar55.

Shazooney: ‘Adults are weird. I would expect this reaction from a kid but in reality kids wouldn’t care.’

iSurvivedThanos18: ‘That’s usually the case. Once when I worked at Target, I had a (Caucasian) woman cause a huge stink over the fact the white baby dolls were regular price but a particular African-American doll was on clearance. “That’s so racist. You’re telling kids that black dolls aren’t worth anything.”

‘I tried explaining that things that sold really well stayed at regular price and things that didn’t sell were put on clearance. It had nothing to do with the color of the doll other than what guests (what Target calls customers) were buying. She carried on and on. Until finally, she told her daughter, “Well, the one you want isn’t on sale. You’ll have to put it back.” Kid said, “NO!” Mom said, “You can have the other one that is on sale.” Kid wanted nothing to do with it. She left while her child wailed at being empty handed. The lady was still rambling and ranting about how racist we were.

‘Ended up she was just upset that the doll she wanted to buy was full price and her kid didn’t want the clearances, non-white doll. So, yeah… Target was the racist here.’

Meme of the day