It’s that time of year when everyone’s doing end of year retrospectives, but few will be quite so satisfying as a look back at those occasions when Piers Morgan was beautifully, satisfyingly, devastatingly owned (delete as appropriate).

Here are 10 of our favourites.

1. When Gary Lineker did this

Interesting to see Ian Chappell so outraged & offended by Aussies sledging Poms.
This is the same Ian Chappell who when I politely said hello to him in Melbourne, responded by calling me a ‘dickhead’. https://t.co/iPrtxsyddM

To be fair to him, that’s not sledging, that’s just an honest observation. https://t.co/tXFGLf2ycZ

2. When Adam Hills told him this on Good Morning Britain

3. When actor Reese Dinsdale did this

Nigel Farage looking & sounding like a leader on #Marr. Love him or loathe him, at least he believes in what he says & argues it with passion. His popularity comes from his authenticity & his new surge is happening because democracy is being denied to those who voted for Brexit.

If you can’t tell the difference between ‘looking & sounding like a leader’ rather than faux indignation & empty bluster… then your opinion is worthless to me. https://t.co/8vnZyUxIKZ

This may explain why you haven’t had any lead roles for years. https://t.co/m7LhiGPlJB

Oh dear!
If you’d done your homework, you’d see that I’ve been directing television drama, one of which last year won an RTS Award, beating two other nominated programs in the category… your morning show being one of them. https://t.co/7KgOembVGR

4. When he retweeted this chap … 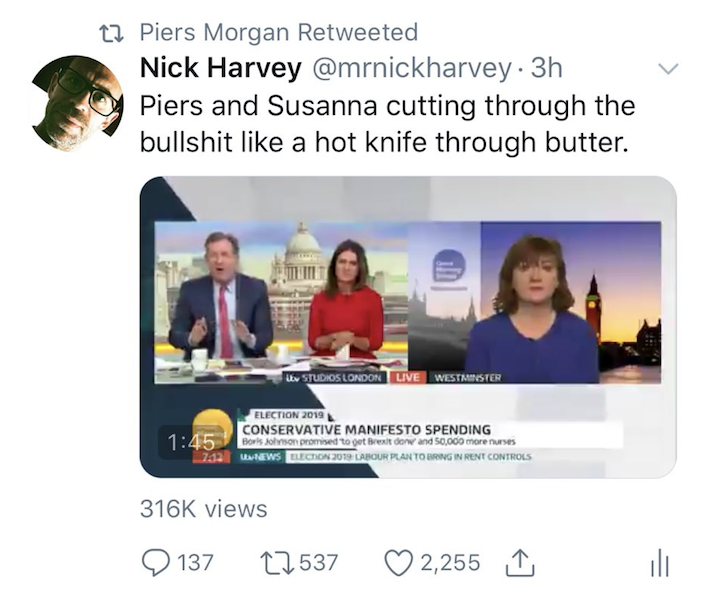 … and the great Nick Harvey did this. 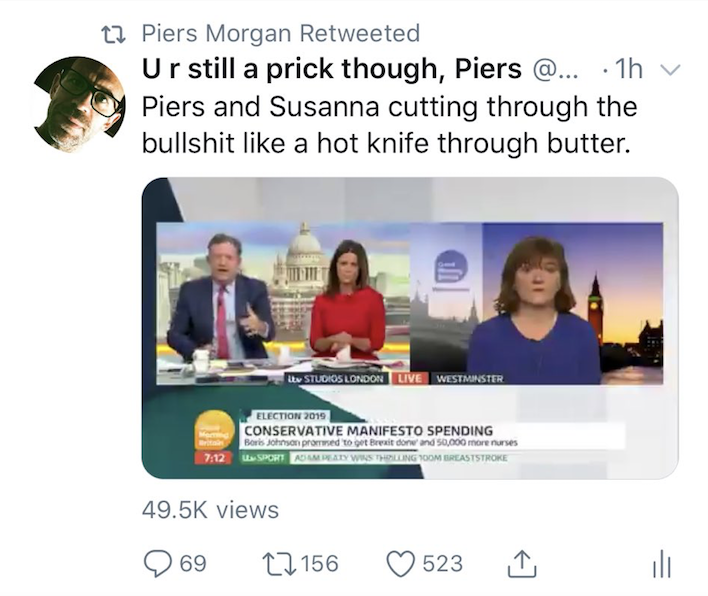 5. When he mocked Nish Kumar

Yes and the experience of being so loudly disliked has given me a real insight into what your life must be like every day. Respect.

6. When he trolled Meghan Markle and his breakfast TV rival Dan Walker did this

Imagine being two staggeringly privileged royal multi-millionaires going to Africa to make a documentary that supposedly ‘shines a light’ on poverty, violence against women/girls & racial inequality – then in fact making it all about their own terrible struggle? I mean, FFS. pic.twitter.com/YCm9qAgzAd

Imagine being given a TV show & a newspaper column & using them both to pick on a woman who didn’t want to go out for a second drink with you 🤔 https://t.co/fPZ3Z5Rhth

Imagine being the dullest, most excruciatingly virtue-signalling, tediously opinion-devoid, toe-curlingly snivelling sycophant on TV?
ps For the record, I never asked Meghan for a drink, she asked me. https://t.co/v0b1Be7rFR

Imagine losing the plot (and the argument) to the “dullest, most excruciatingly virtue-signalling, tediously opinion-devoid, toe-curlingly snivelling sycophant on TV”👍🏻😂#TearsForPiers https://t.co/AKiXcShwnw

7. When he tried to humiliate this Love Island contestant and this happened

8. When Richard Herring replied on behalf of this chap

Hi Jim, I understand your pain.
I’d feel bitter too if my surname was an anagram of Bellend. https://t.co/eyMGZPMEoc

9. When Vinnie Jones said this about him at the Oscars

10. When he was owned by a vegan sausage roll

Nobody was waiting for a vegan bloody sausage, you PC-ravaged clowns. https://t.co/QEiqG9qx2G

While we’re here, remember when he experienced the ‘pain of childbirth’?

How painful is childbirth? @piersmorgan finds out the hard way! 😣

next story
Breaking News: Self-own of the week