“Slowly walking down the hall /
faster than a cannonball”
Champagne Supernova, Oasis. What a clunky crock of shit in the middle of an otherwise beautiful song. https://t.co/Jc8ikT7uaD

A bunch were just plain weird.

“What about elephants? Have we lost their trust” – Michael Jackson (earth song)

I love Piano Man, except the bit where Billy Joel sings 'tonic and gin' to make it rhyme, thereby creating a drink never ordered in the history of the world.

“Lucky that my breasts are small and humble, so you don’t confuse them with mountains” – Shakira in ‘Whenever, Wherever’ (•)(•)🌄 https://t.co/lMlMQRouoQ

Castle on the Hill by Ed Sheeran.
AKA 'Look how shit my friends' lives are' https://t.co/wUG0ryScjS

A few can only be filed under ‘WTAF?’

“Well tonight thank God it’s them instead of you,” is never not atrocious.

I fell in love with a slit eyed lady, by the light of an eastern moon – Rod Stewart.

21. Not even this classic was given a free pass.

every time someone intimates that they think john lennon's imagine is a beautiful and profound song i laugh until i'm hoarse. imagine there's no countries https://t.co/KCWa5L6YC7

As good/bad as those all are, this exchange should qualify for some sort of an award. 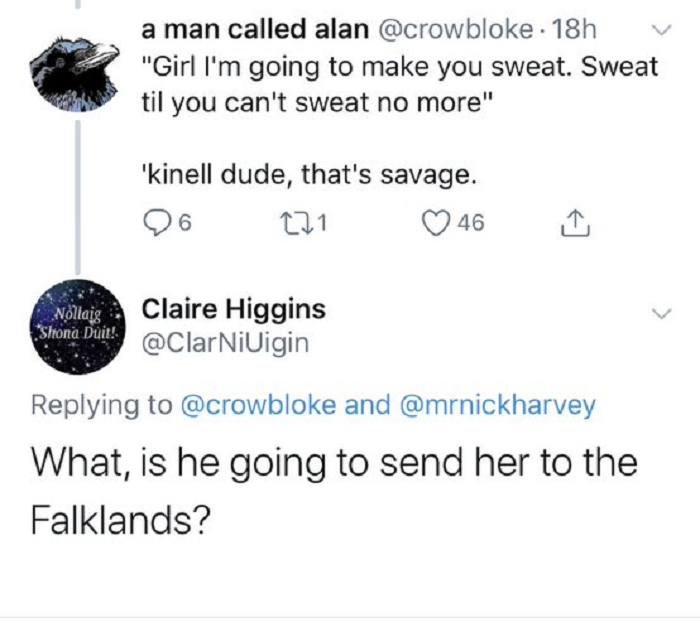 At the time of writing, this is the state of play.

I’m struggling to keep up with the replies, but Snap are way out in front with “I’m as serious as cancer when I say rhythm is a dancer” followed closely behind by Toto’s “As sure as Kilimanjaro rises like Olympus above the Serengeti”.

But get yourselves over to the thread, because it’s Twitter gold.