After watching the Duke of York’s car crash TV interview and seeing the fallout, insistent commentator, Toby Young, felt he should weigh in with some fairly useless advice to HRH, unless he’s in possession of a time machine, that is. 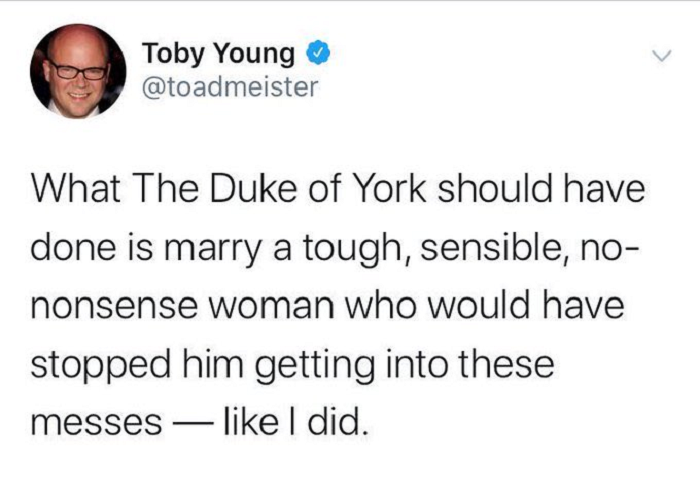 Now logic, as well as Young’s subsequent explanations, suggest that he was referring to the foolishness of doing such an interview, rather than any illegal activities carried out by the prince’s child-trafficking former – now late – friend, Jeffrey Epstein. But his tweet very much looked like a horrible self-own, which is almost his stock in trade.

Whose fault is it if you rape underage girls?

Everybody: Uh, your own

Galaxy brain Toby Young: Wrong! It's the non-existent woman who should have stopped you. pic.twitter.com/UpP7afTQOT

“WHO AMONGST US (without our tough, sensible, no-nonsense wives) WOULD NOT HAVE DONE EXACTLY THE SAME THING AS THE DUKE OF YORK HMMMMM???????” pic.twitter.com/xsKbTcNM29

Saying that your wife is basically your own personal copper tasked with preventing you from porking underaged girls isn’t the astute observation he thinks it is pic.twitter.com/Vykph8jJbI

Toby Young isn’t a sex offender/paedo because his wife won’t let him. https://t.co/dPikoT9BJo

Hang on. Is Toby Young saying here that if it wasn't for the fact he got married he'd be involved with trafficked teenagers? pic.twitter.com/Zgxknraafo

Good point by Toby Young – it’s only natural that any man not kept under close surveillance by a woman will inevitably spend all their time rogering underage girls in mansions. pic.twitter.com/U9w5hFZp3X

Toby Young married his mum, pass it on pic.twitter.com/pAR7ZE5Jau

Get that sentiment on a valentines card bruv. “To my dearest wife. You’re the reason I’m not a paedo” https://t.co/PtN3wPKPFT

Never has someone forgetting their wife’s anniversary while having a strict content brief been so obvious. pic.twitter.com/tosZcZDKjj

Writer, Sarah Dempster, reacted not to the content of the tweet, but to the fact that it was, yet again, ill-thought-out and self-damaging.

I see Toby Young has tweeted his tweet again. pic.twitter.com/fq9v7wxIhx

When will the free-school founder learn?