A guy on Reddit shared a picture of how he updated his mum’s TV remote control and it will strike a chord with anyone who’s ever had to do something similar for a parent.

We say ‘something similar’ because we’ve never tried anything quite so radical as this. And more fool us. 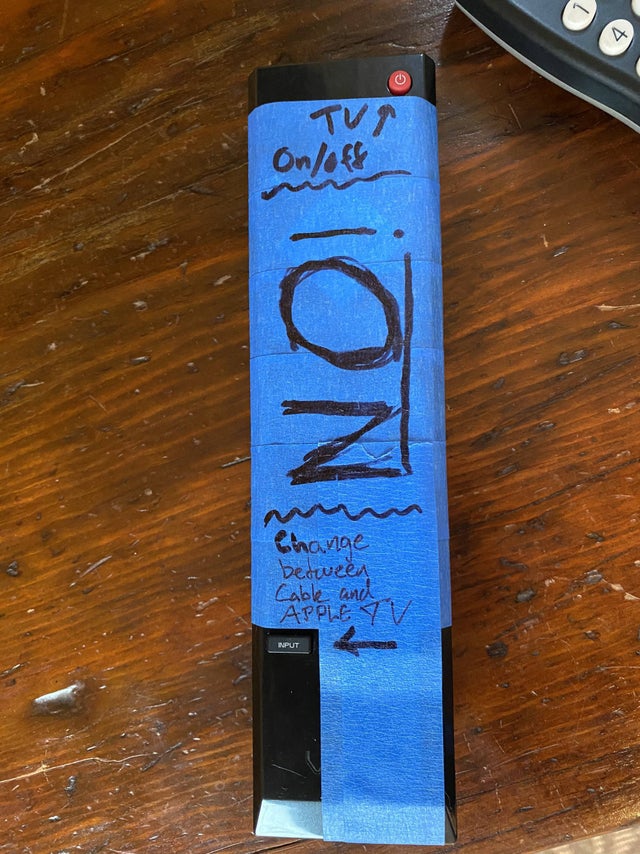 That should do it! And it prompted lots of funny stories on Reddit. Here are some favourites.

Connectikatie: ‘A conversation I overheard between my father and grandmother when she called for help with her tv:
“What’s on the screen? … The TV screen, mom … Is the blue light in the bottom right corner? … That means the power is off. Press the big red button on the remote … Yes the TV remote. It’s the silver one … Press the big red button …
“Hello?…. Mom? …. Hello?……
“She pressed the hang up button on the phone….”
They say senility isn’t funny but sometimes it just is.’

Kryptosis: I had a customer call me once and they had called the wrong store. I felt like helping so I gave her the number she was looking for.
As I’m reading the number out to her she’s trying to dial it right into the open line. I explain to her that she’ll need to hang up the phone before trying to dial the new number (which I hadn’t finished giving her). I proceeded to read the rest of the number out loud to a dead line as she had hung up to start dialing the first half of the number I had managed to relay. She didn’t call back.’

seahorse_party: ‘I had to do this for my little Polish grandmother, who was 92. She kept trying to turn on the music-only channels, but kept getting lost in the pay-per-view area. After I saved her from ordering porn multiple times, I finally said: “Gram! You have to stop pushing these buttons! You’re going to order pornography!” She asked me what that was. I told her it was graphic sex on television. She waited a minute and said, “Oh. Maybe I’ll check that out when you’re not here.”
I eventually taped over the buttons. (After making sure she didn’t actually want to order College Co-eds 12 or anything.)’

The 9 stages of fixing a TV remote control

next story
Breaking News: This dog blissing out on a trampoline is just the content we needed today