And this is what he’s talking about. That very first word – ‘FACT’ – is enough to set the alarm bells ringing. And it’s not a drill. 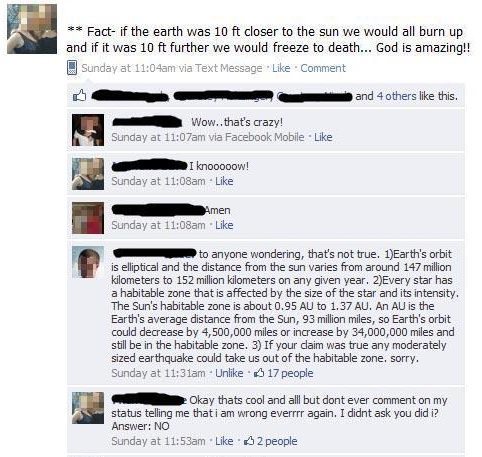 ‘FACT – if the Earth was 10ft closer to the sun we would all burn up and if it was 10ft further we would freeze to death. God is amazing!’

‘To anyone wondering, that’s not true.

3) If your claim was true any moderately sized earthquake could take us out of the habitable zone. Sorry.’

‘Okay that’s cool and all but don’t ever comment on my status te3lling me that I am wrong everrrr again. I didn’t ask you did I? Answer: NO.’

Shame she couldn’t be as polite as he was.

chubbycherry: ‘I actually learned something from this post haha.’

ToiletRollTubeGuy: ‘That 10 ft makes the difference between life and death? I know right. PRAISE THE LORD!’