The Conservative Twitter account has been very busy recently, tweeting every different way of saying “Get Brexit done” that they can think of; the trouble with that is that they’re not very good at it. For example, how motivational do you consider an animation that looks like it was made on a ZX Spectrum?

Come together.
↓
Back the new deal.
↓
Get Brexit done.
↓
Move on as a country.

One tweet that got a lot of attention, if not the kind they would have liked, was this:

Now is the time for MPs to back the new deal and get Brexit done.#GetBrexitDone pic.twitter.com/JuqaOVdlMC

Their choice of the universally reviled Comic Sans caused a torrent of burns.

Look, I opposed the govt before. But I will die in a ditch if it's a war against comic sans, you unspeakable vandal bastards. https://t.co/ezRZhZhYQA

Honestly not sure which is worse, the sentiment or the font… https://t.co/PhnUzhR7EP

were all the good fonts European? https://t.co/qrR6tLl9xN

Our country is being run by people who think Comic Sans is an acceptable font. https://t.co/9tv4U9CEZX

“I thought Brexit was a tragedy but then I learned it was a comedy.”

Can't wait for the next one written in Papyrus https://t.co/N3ph1oKLSi

To prepare people for what it will be like after we set the country back several decades, we are doing all Tory communications in Comic Sans. https://t.co/kRyn0MzNJG

comic sans? these man are some trolls https://t.co/NAYKSfurhW

Lads this is brexit, not a poster board in primary one https://t.co/15VU8AQ8RX

Saw "Comic Sans" was trending and never in a million years would have guessed that it would turn out to be this hilarious. https://t.co/41YpLs0J6C

Even the BBC’s Newsnight mildly trolled them, with this change of look … 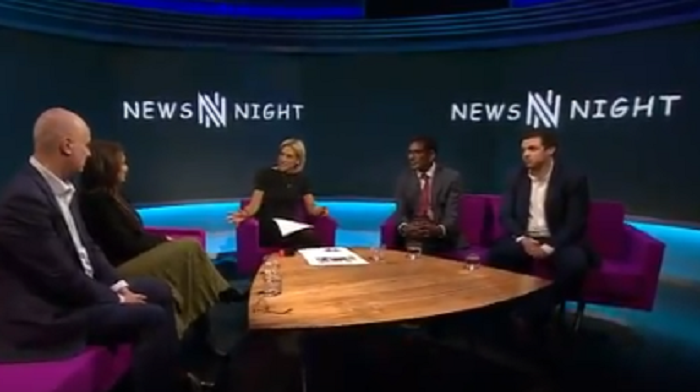 Political sketch writer Tom Peck believed the choice was due to strategy rather than poor taste.

This new strategy of being deliberately crap so everyone notices you explains so, so, so much of what is going on in the Conservative Party. https://t.co/auitGIEL4d

And for how many decades has this been going on?

next story
Breaking News: This old clip of Ricky Gervais on The One Show has gone viral all over again and it's an innuendo-laden treat