A late contender for burn of the week comes from former Star Trek: The Next Generation actress Denise Crosby and the show’s producer, Rick Berman.

It went viral again on Reddit because, well, here goes … 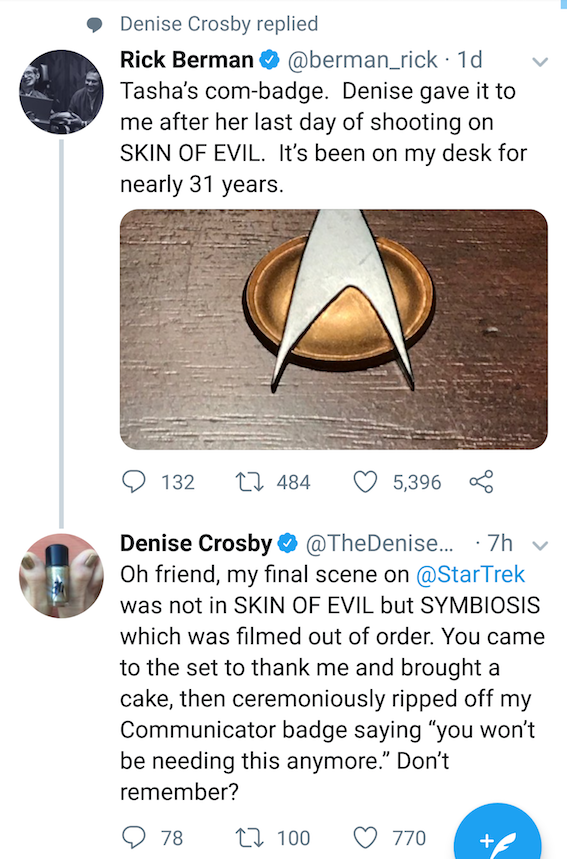 If you want to know more, here’s what Denise told Trek Core – we’re into deep space here – about what happened.

TrekCore: What can you remember about your last day on the set, do you have any memories of it?

Denise Crosby: Sure, I mean I thought that would be the last day and they came down with a cake and you know… But my favorite thing is when Rick Berman, the producer, came down to the set and the very first thing he did was pull off my communicator from my uniform and said, “Well, won’t be needing that anymore!” […] You used to just stick [it on with] velcro and it was just like some weird symbolic gesture… I don’t know if he thought I was going to sell it on eBay or you know… I mean they all looked the same – it wasn’t like mine was any special thing – it was just a very strange thing – I’ll never forget that. “Won’t be needing that anymore!”

And later Denise said this.

Friends, please, no more unkindness toward my friend @berman_rick I was talking about my COMMUNICATOR, for fuck’s sake, not real! If I want to address harassment and feminism, wait for my autobiography. He’s a friend, colleague, and helped cast me in the best gig of my life.

Burn of the week