We’re grateful to the fabulous @LettersofNote for sharing this brilliant letter sent by film producer Mark Forstater back in the day about cuts that were required by the BBFC if Monty Python and the Holy Grail was to be given an A certificate.

The dialogue he outlines will be familiar to anyone who’s seen the film (everyone, then). It’s a potty-mouthed delight. 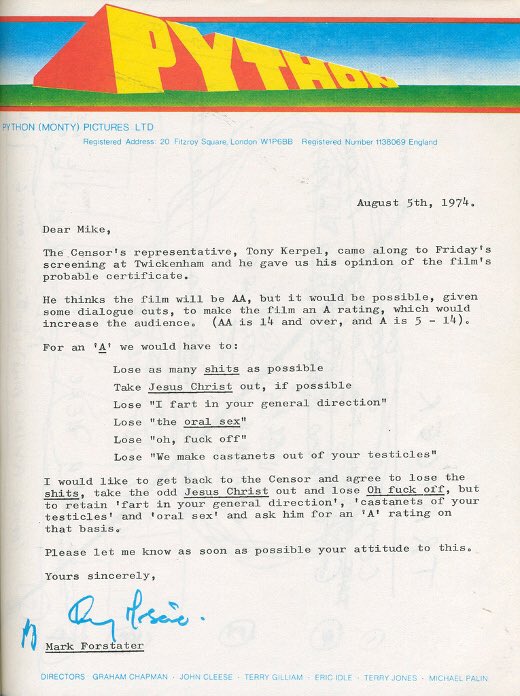 The censor’s representative, Tony Kerpel, came along to Friday’s screening at Twickenham and he gave us his opinion of the film’s probably certificate.

He thinks the film will be AA, but it would be possible, given some dialogue cuts, to make the film an A rating, which would increase the audience. (AA is 14 and over, and A is 5 – 14).

Lose as many shits as possible

Take Jesus Christ out, if possible

Lose ‘I fart in your general directin’

Lose ‘We make castanets out of your testicles’

I would like to get back to the censor and agree to lose the shits, take the odd Jesus Christ out and lose Oh fuck off, but to retain ‘fart in your general direction’, ‘castanets of your testicles’ and ‘oral sex’ and ask him for an ‘A’ rating on that basis’

Mike Forstater, the chap who wrote it, later sued the Pythons, resulting in rather more four-letter words than he outlines here.

We’re guessing the Mike is Michael Palin, but tell us if we’re wrong!

Not only a superb letter, but I want to know what’s scribbled on the back.

And just in case you’re wondering, the film was eventually given an A rating (you can read the BBFC’s case study here).

We’re with Minnie Driver, to whom we are grateful for pointing it out on Twitter.