Never let it be said that Tory MP John Redwood doesn’t stick to his principles. He’s so keen on Brexit that a recent Westminster dinner he turned down Evian water because it’s – yuk! – French.

this is heroic devotion to the cause – via ⁦@MrHarryCole⁩ pic.twitter.com/1WjUlRkf0f 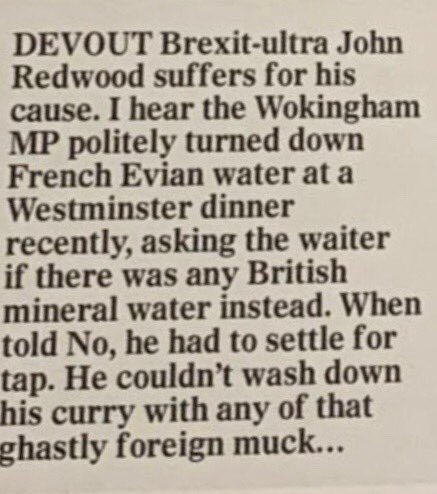 Except, if he was hoping to prove a point, well, it might have stuck in his throat.

who's going to tell Redwood that one of the shareholders in Thames Water is Dutch pension fund Stichting Pensioenfonds Zorg en Welzijn https://t.co/oIsRh45dtM

Or the fact that Buxton Mineral water is owned by Nestle, Highland Spring's owner is from UAE and Coca Cola owns Malvern…

All this is, of course, due to Conservative policy. The EU only calls for fair competition where water supply is privatised. Belgian water supply is still run by consortia of local authorities.

Any time there's a southerly wind, we should tell Redwood it's French oxygen.

should have got a pint of Ruddles off Tim Martin

John Redwood comes across as so human in every anecdote, doesn't he?