There was something unusual about the coat worn by Melania Trump to accompany her husband at a ceremony to mark the 18th anniversary of the 9/11 attacks.

And it’s fair to say that people really can’t believe it.

Here’s what was tweeted by the so-called president, and you’ll have to zoom in close to see it.

Is…is that a plane crashing into one of the twin towers in the back of Melania’s coat?!? pic.twitter.com/7hhBjooU4z 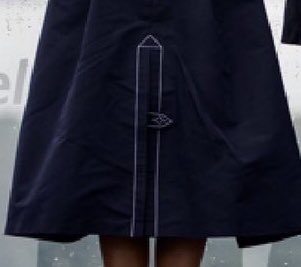 I’m sure I’m not the first one to spot this but who in the world thought it was a good idea for Melania to wear this coat in the 9/11 photo. It legit looks like an object is flying into a tower or the Washington Monument pic.twitter.com/w2qOpxP15G

That's not 'shopped. That's what both Don and Melania posted.
Her jacket has stitching that's a building with a plane crashed into it. pic.twitter.com/9GHC9izjaJ

Except there was also an entirely feasible explanation.

I don’t think she choose to wear that coat for that reason. That is a white topstitch on the back spilt & button flip nothing more nothing less.

I cant stand either one, but that coat dress is a flap with a button NOTHING MORE.

Maybe it’s because she’s got a bit of a history with her wardrobe that it got people talking.

The other coat was purposely worn per Melania. This coat is just reading into the situation. pic.twitter.com/ZQTZyejUlQ

Yes, it is just a coat. But someone really needs to check her wardrobe beforehand for the possible public perception of the optics, no matter whether or not the optics be unintentional.