Of all the weird things in this Liz Truss picture, the framed dog photo is the weirdest

There are so many weird things about this photo of so-called trade minister Liz Truss apparently doing important trade deals with Japan.

Just to recap, in case you’ve missed this (the upside down phone is an added extra).

Did you spot all six deliberate mistakes in this photo?
• Phone held upside down.
• Wearing two watches.
• Paper in folder is blank.
• Skirting board is two feet tall.
• Picture of dog is a photo-op.
• Liz Truss is a Secretary of State. pic.twitter.com/nA08LsFOsr

But the dog has to be the weirdest. And this is why.

It get better… its not even her dog in the photo. Its a random one she met at a visit to the paint company! pic.twitter.com/i7gKK7snO7 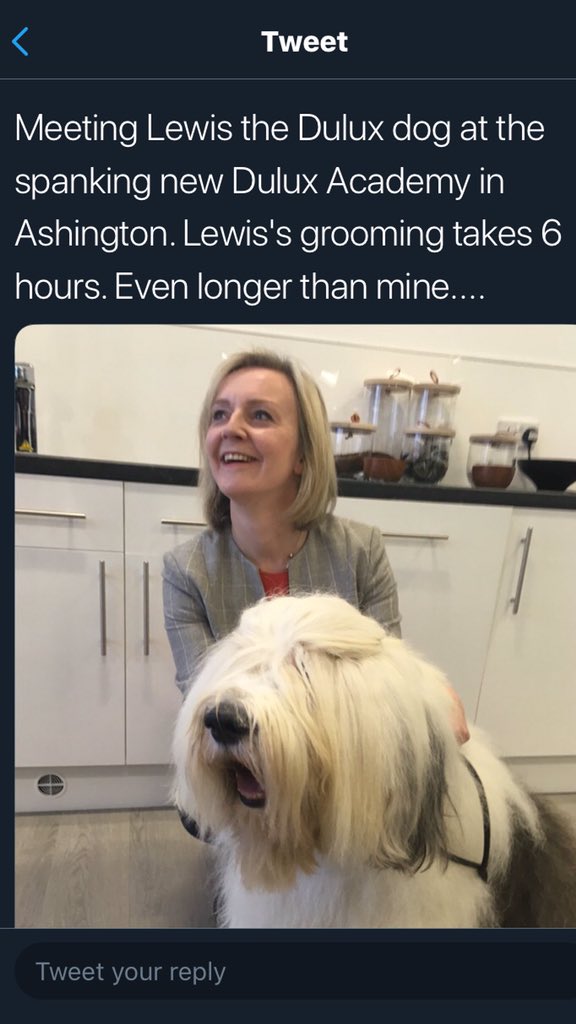 With a tag still on the chair

Just let that sink in.

Oh my god Liz Truss is pretending to do work in front of a framed photo of someone else's dog https://t.co/28nfoEdtxT

It’s a pretend government of pretend ministers pretending to be negotiating in good faith inside pretend offices decorated with pretend photos of pretend dogs. When all this pretending goes completely tits up, they are going to pretend it’s all the EU’s fault.

You would think the PR who stage managed this photo would have made sure Liz Truss held the phone the right way round – and the Dulux dog in the photo wasn’t from a previous photo opp! Straight from an episode of The Thick of It. pic.twitter.com/a9dG2lZJFX

Did she train it to bark drones out of the sky?

Planes grounded by drones at Gatwick. Whatever happened to Liz Truss' specially trained attack dogs that can bark drones out of the sky? pic.twitter.com/YpKl1BB0a9