The Sun newspaper isn’t known for its insightful and nuanced editorials, nor for its balanced and sensitive reporting, but for being deeply entangled in the hacking scandal, dog-whistling headlines and being shunned by Liverpudlians for its Hillsborough coverage. The paper’s political allegiance is currently with the Tories, and today’s front page shows it thinks the (other) Sun shines out of Boris Johnson’s …face. 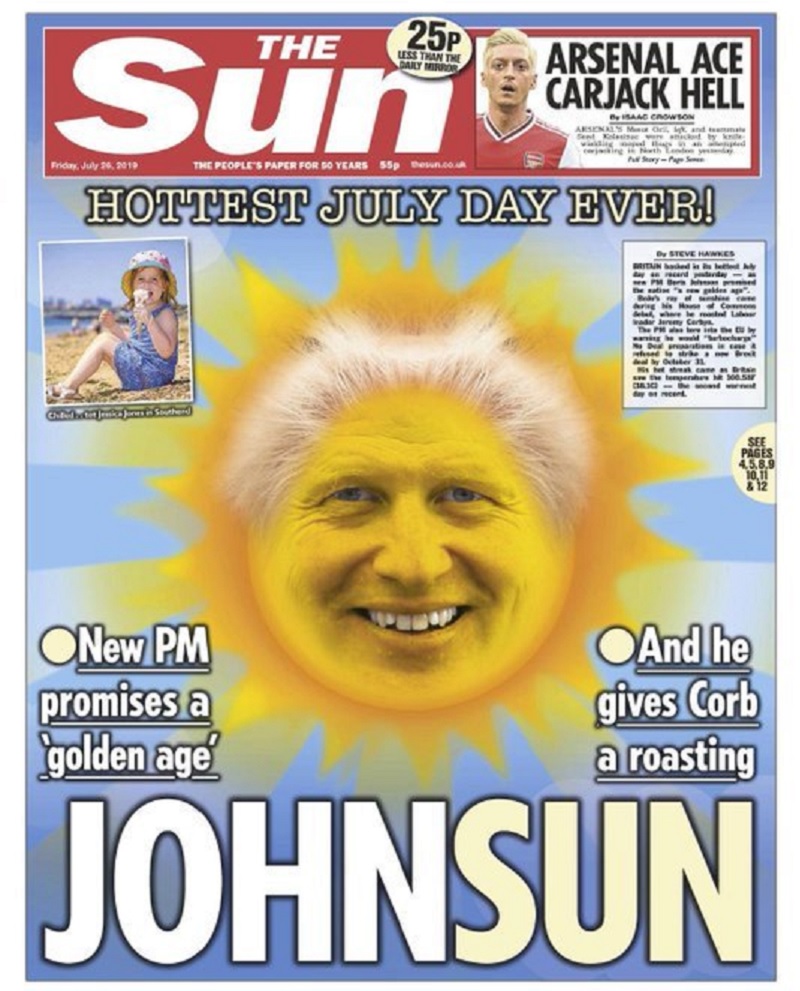 The astonishing combination of terrifying image and mystifying hot take got people talking.

"Well… I wasn't going to vote for him, but when I saw his incarnation as ROHA, TURNIP GOD OF FIRE AND OPTIMISM, I thought, well, I think he'll make a nice change" https://t.co/4LoYHXNoOt

In the name of the everloving infant Christ.

I genuinely think that the official newspaper of a dictatorship would have been too embarrassed to print this pic.twitter.com/CPxpbKZ8H7

Try not to have nightmares pic.twitter.com/lxKeVh3Rhr

I’m ready for the fucking asteroid now. Biggest cunt you can find. Bring it all the way the fuck on. pic.twitter.com/x7RCw5TSMV

What on earth is wrong with the media in this country ‍♂️ pic.twitter.com/HtFP5cptSx

Want to feel old? This is what the baby from the Tellytubbies looks like now.
Want to feel despair? He never grew up but somehow became Prime Minister. pic.twitter.com/byCXMwsPhg

If this were any other member of our vital – and dying – Fourth Estate you might say it had debased itself, degraded itself, shat its pants in a busy shop and stood there giggling in its own pungent mess. But it’s The Sunt. And this is merely a slightly lower ebb than normal. pic.twitter.com/OpZeY64qsm

Funny tweeter, @GeneralBoles had a criticism that was nothing to do with the wisdom or otherwise of the paper’s lionising of Boris Johnson.

I hate to critique a fellow photoshopper but unless they were going for hairy yellow spacehopper I think this should have stayed in the drafts folder pic.twitter.com/A19g0EMczd

The Sun has a drafts folder?