The good people of YouGov have done a poll of the nation’s favourite classic British dishes and it must be right because when has a pollster ever got anything wrong?

It’s fair to say, however, that not everyone’s happy with the results.

What are the very best classic British foods? (savoury edition)
We can now crown Yorkshire Pudding as Britain’s finest home-grown food, with 85% of Brits who have tried them saying they like them. Sunday roasts and fish & chips come joint second on 84%https://t.co/2mF0n4khqf pic.twitter.com/pW3xmqQOYu 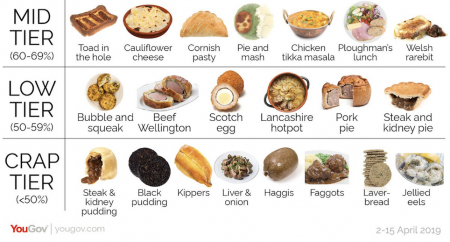 I hate this godforsaken country. Literally the bottom two tiers and top two tiers should be directly swapped https://t.co/57DM89eq2v

Scotch eggs are ‘low tier’? What is wrong with people

this is why scotland wants independence https://t.co/qYB8vkx5sl

Steak and kidney pudding, black pudding, liver and onions and haggis are not crap!

The strongest case yet for multiculturalism. This is all you'll be left with if we leave. Even the 'chicken tikka masala' will be 90% yoghurt https://t.co/KXX22oJqkt

Haggis is one of the greatest foods ever given to this country. Absolute heathens

95% of the foods on this are beige, which says more about Britain than the ranking ever could https://t.co/W6dMmEcRtg

Never let it be said that you can't fix a YouGov poll.
Many thanks to all our followers who prevented us featuring in the 'Crap Tier', and commiserations to our colleagues at the UK Jellied Eels Consortium. https://t.co/kakSBvNOx0

This is a fucking mess

where tf is the vegan sausage roll https://t.co/cS56YYRay5

thing that annoys me about this the most is that you have just inversed the cottage pie image for the shepherds pie, they are the same photo. peak laziness

What are the very best classic British foods? (sweet edition)
Scones and Victoria sponge are the undisputed champions of sweet British cuisine, with 85% and 81% of those who have tried them saying they like them. https://t.co/2mF0n4BShN pic.twitter.com/RhcOJC8hOy 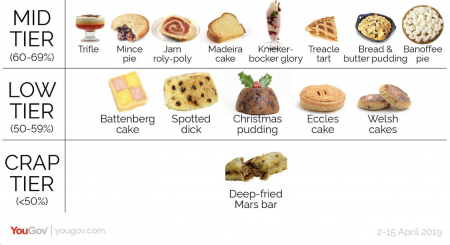 Who the hell voted for trifle?

next story
Breaking News: If this man refusing to wash his hands has you shaking your head, wait until you read the replies