It was a meal fit for a prince but chosen by a president, the royal banquet served up by Donald Trump for Prince Charles, the Duchess of Cornwall and a whole bunch of other big nobs.

The Observer’s restaurant critic Jay Rayner wasn’t impressed and neither, it turned out, was Twitter.

If you think being a prince or president is pure glamour, feast your eyes on this staggeringly dreary menu served tonight by Trump at the US embassy for Prince Charles. Tomato salad; steak and chips; fruit salad and ice cream. Sponsored wine. Its where appetite goes to diepic.twitter.com/Nr0B3JnLpP

Here it is in full. 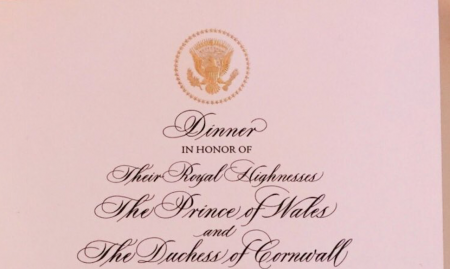 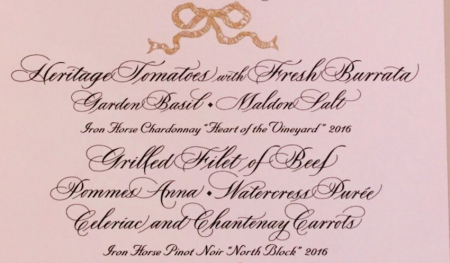 And here are our favourite things people said about it on Twitter.

This is entirely because Trump lives on burgers and fries. This would have been the most grown up thing they could serve him without him turning the plate upside down on the table and bawling.

It’s a pretty barren meal when you list salt as an ingredient.

“Homemade” ice cream!?! So presumably the rest of that crap is from Brakes?

"Fresh" burrata has already become quite possibly my favourite ever Utterly Redundant Menu Adjective though. Worth it just for that.

I’m more astonished that anyone could actually read it!! That font!!!!!

I believe that font’s name is Pretentiousness. It’s a close second in annoyance to Comic Sans.

LOOK AT THE CURSIVE WRITING THOUGH OOOOOOO IT MUST BE DEAD POSH LIIIIIKE!!

Your complaint is false news. It's a fine menu. A very, very fine menu. It's the best menu. The best menu ever. And that French tire man has awarded it twenty-seven stars. So there.

Not everyone was unhappy with it though.

I can’t lie, this is my kind of menu…

Tbh I’m pretty into it too

I dunno it might not be exciting but it’s v edible, I’d scronf it right down

And just in case anyone was in any doubt, Jay Rayner added this.

Just to be clear, of course I’m a bloody snob. It’s in the job description.

next story
Breaking News: This tale of an attempted bank scam is a handy reminder for us all