Relationship dilemma of the week

We’re not quite sure how we ended up here but, well, we’re here now. It’s time for our relationship dilemma of the day, as shared by this woman on Reddit.

And if you think that sounds totally and completely utterly nuts, you’d be right. 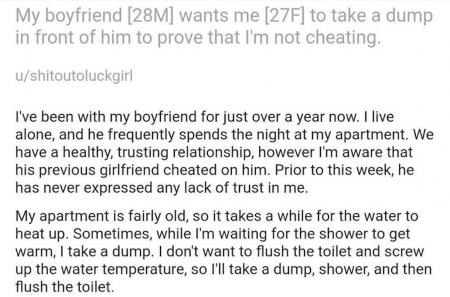 The only dilemma, of course, is how quickly to leave him. Right now, or … right now?

It went viral after it was shared on twitter by @redditships and here are just some of the things people had to say about it.

My boyfriend [28M] wants me [27F] to take a dump in front of him to prove that I’m not cheating. pic.twitter.com/6C3sOwHn2V

take that dump on his pillow

A lot of people are saying this is fake but this sort of women are delicate flowers and also must be cheating on me type misogyny is RAMPANT. I 100% believe.

I have a friend who once screamed in rage at me when I told him women fart. He was adamant that they didn’t. Totally believe this poop story.

we truly do people a disservice when we absorb their bad behavior or write it off… because those bad behaviors become habits – habits that don’t tend to change unless and until they lose a relationship over them. Maybe not even then. 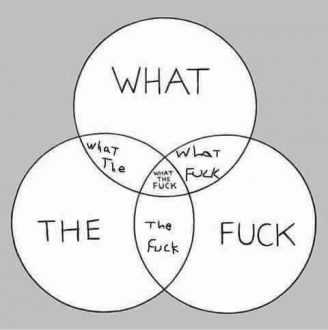