Still one of the all-time great self-owns

In the self-own hall of fame, this one has got to be close to the very top.

It’s a woman called Naomi who was really excited to be accepted for an internship at NASA. We know she was excited because she went on Twitter and told everyone else to ‘shut the fuck up’.

A chap called Homer Hickam didn’t approve of her language, but Naomi was having none of it. This is how it went.

Out of this world.

A furry became an intern for NASA and got instantly fired after telling someone on their council to suck their dick because this is 2018. pic.twitter.com/XL7jvCKFFj

To be fair, he’s not verified, so how can us hip millennials know he’s important

Do you people really want to pretend this young lady deserves to lose the opportunity of her life for being uncouth, as is typical on the internet, with her excitement?

Is that justice to the internet mob?

She later lost the internship, by all accounts, AKA was brought back down to earth. Homer Hickam – you remember, the NASA guy – later wrote a blog post about it.

Hold the fuck up now.
Read Hickam’s own words before casting these judgments. https://t.co/5wXQ39l9qQ
This girl was profusely apologetic, and regardless, Hickam had NOTHING to do with her firing- it was people online contacting/tagging NASA about the post

Huh. He seems like a good dude. (And thanks for going through the effort to cite that, @DurnkCorgi! Left me feeling a little more optimistic about everything.) pic.twitter.com/m67PP9EkRj 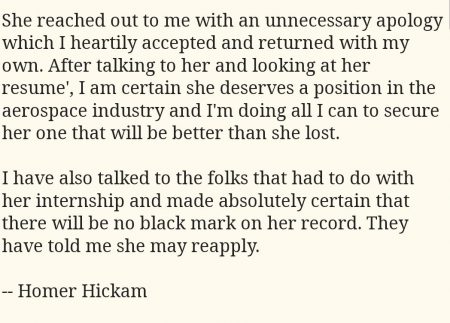