It’s not easy to convince anti-vaxxers to vaccinate their kids, as anyone who has tried arguing with an idiot will testify.

But this paediatrician shared a brilliant story over on Reddit of how a colleague came up with a foolproof (it would have to be) way of winning anti-vaxxers over. 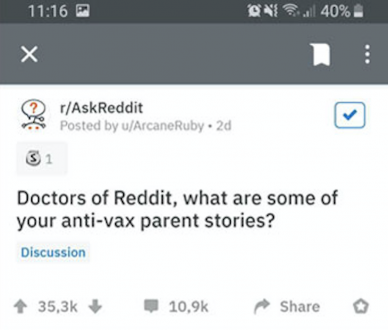 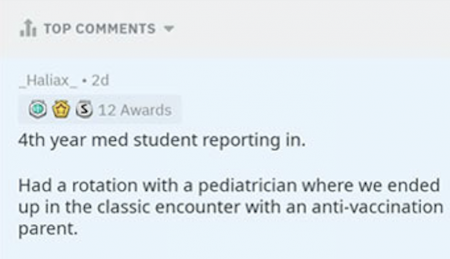 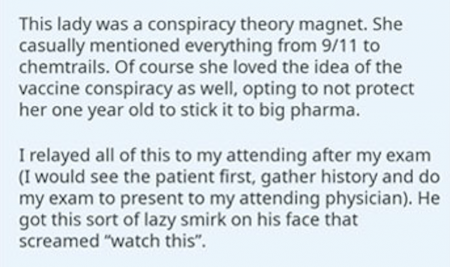 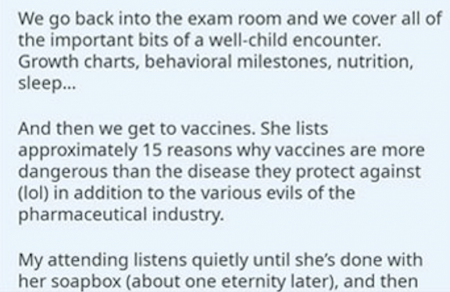 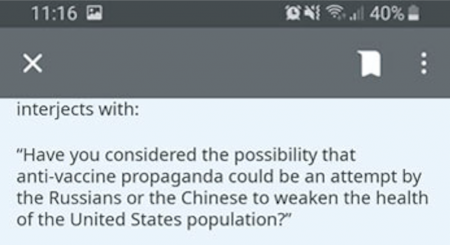 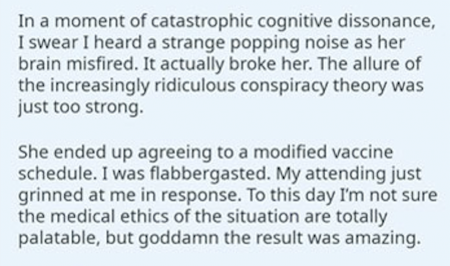 ‘Had a rotation with a pediatrician where we ended up in the classic encounter with an anti-vaccination parent.

This lady was a conspiracy theory magnet. She casually mentioned everything from 9/11 to chemtrails. Of course, she loved the idea of the vaccine conspiracy as well, opting to not protect her one year old to stick it to big pharma.

‘I relayed all of this to my attending after my exam (I would see the patient first, gather history and do my exam to present to my attending physician). He got this sort of lazy smirk on his face that screamed: “watch this”.

We go back into the exam room and we cover all of the important bits of a well-child encounter. Growth charts, behavioral milestones, nutrition, sleep…

‘And then we get to vaccines. She lists approximately 15 reasons why vaccines are more dangerous than the disease they protect against (lol) in addition to the various evils of the pharmaceutical industry.

‘My attending listens quietly until she’s done with her soapbox (about one eternity later), and then interjects with:
“Have you considered the possibility that anti-vaccine propaganda could be an attempt by the Russians or the Chinese to weaken the health of the United States population?”

‘In a moment of catastrophic cognitive dissonance, I swear I heard a strange popping noise as her brain misfired. It actually broke her. The allure of the increasingly ridiculous conspiracy theory was just too strong.

‘She ended up agreeing to a modified vaccine schedule. I was flabbergasted. My attending just grinned at me in response. To this day I’m not sure the medical ethics of the situation are totally palatable, but goddamn the result was amazing.’

And just a few of the comments it prompted on Reddit.

This weatherman totally flips at the complaints about his tornado warning