Blogger @knee_deep_in_life, also called Laura, hilariously emulates the bizarre publicity shots released by models and celebrities, but without the added ingredient of a personal trainer, thousand-dollar bikinis and a shed-load of pomposity. This is how they tend to turn out:

However, she is constantly criticised for her appearance by people who have completely missed the point of what she does, so she shared a screenshot of some of the hateful messages she gets. 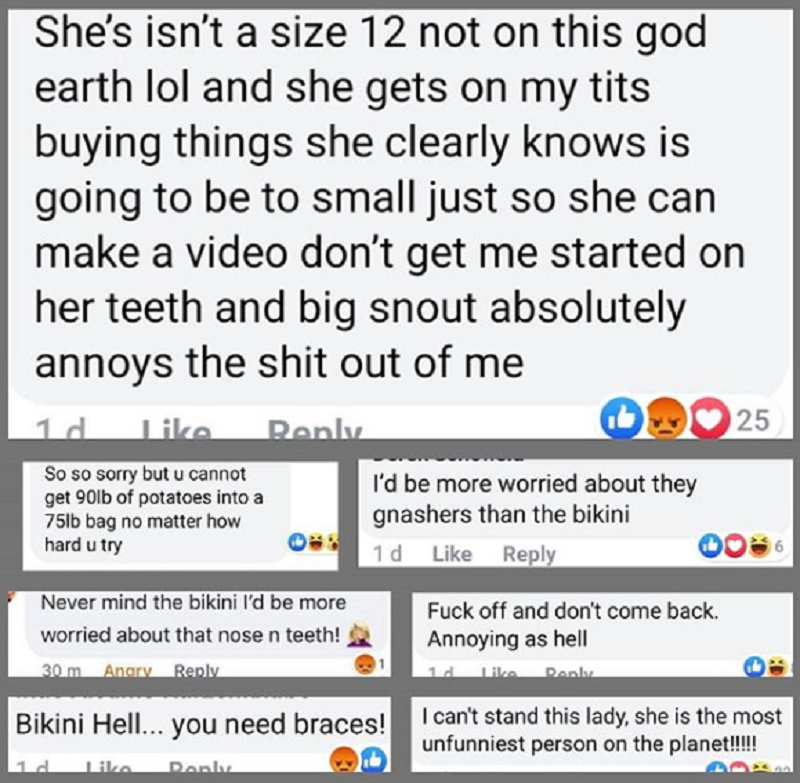 In addition, she wrote the trolls this powerful message.

Your badge of approval must be hugely important to you. Your level of responsibility to troll people must at times feel overwhelming, I can’t imagine the sleepless nights you must have finding new ways to drag people down with your scabby hooves.

My biggest issue in all of this is nearly all of you are women, by the looks of it some with children too. So, firstly I’d like to give you a huge round of applause for setting such an incredible example to your kids. They must be proud!

While you might swipe at me for how sorry you feel for my kids when they grow up, just know that while I make a total tit out of myself, I have empowered thousands on women to know they are good enough just the way they are. You on the other hand have just got your tits in a twist over someone you’ve never met and chosen to not give your opinion but in fact verbally abuse them instead.

I hope beyond all hope that one day your arse wipe comment isn’t the final straw in someone else’s life. That you don’t send someone so far over the edge that they make a snap decision because they believe the horse shit that comes from your mouth.

You aren’t women, you are a disgrace, and I do not stand with you, I am ashamed to even share the same breathing space as you. I’m tired of this being deemed acceptable, the abuse is endless and it’s time collectively the internet took a bigger part in clamping down, not giving these douche canoes a fucking badge of a approval is a small start guys!

I continue to wave my flag proudly, mainly because you guys are here, supporting me endlessly. I don’t need you to tell me to keep going, I already know and that’s thanks to you all.

I never call out the trolls for good reason, because they are attention whores, I refuse to give them the satisfaction of a fight, but instead use everything in my power to show that yes I read your comments, no I don’t give a shit, yes I’ll keep on doing it. No fucks given.

The buck toothed, ugly, chubby twat with a big fucking nose and proud

next story
Breaking News: Laurence Fox has got himself a 'mask exempt' badge - only 7 responses you need