Instantly recognisable right across the world, the Cathedral of Notre-Dame de Paris has been absolutely devastated by an enormous fire which broke out on Monday evening, quickly taking hold of the wooden framework. The cathedral had been undergoing some reconstruction work, with large sections of scaffolding visible around the structure, and there have been suggestions that this may in some way have caused the fire. 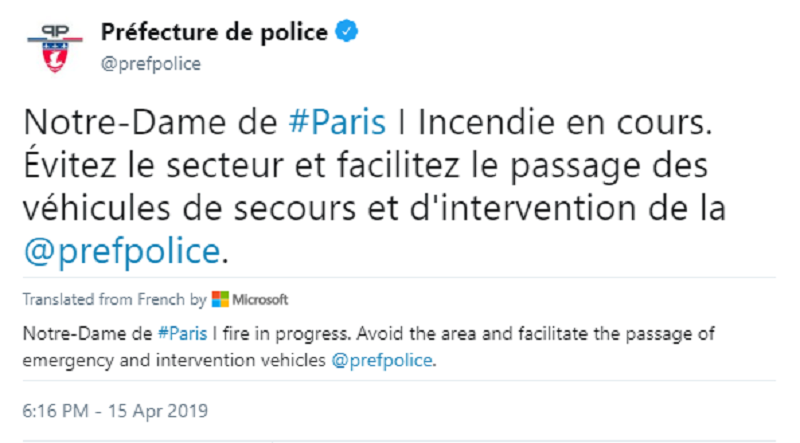 Many people, including politicians and historians expressed their shock and sadness at the terrible scenes. 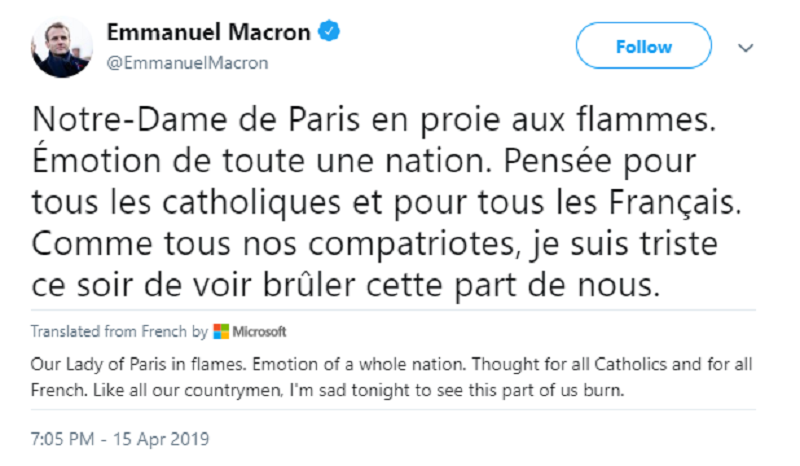 Notre Dame is one of the world’s great treasures, and we’re thinking of the people of France in your time of grief. It’s in our nature to mourn when we see history lost – but it’s also in our nature to rebuild for tomorrow, as strong as we can. pic.twitter.com/SpMEvv1BzB

My thoughts are with the people of France tonight and with the emergency services who are fighting the terrible blaze at Notre-Dame cathedral.

Tonight we pray for the firefighters tackling the tragic #NotreDame fire – and for everyone in France and beyond who watches and weeps for this beautiful, sacred place where millions have met with Jesus Christ. Nous sommes avec vous.

So sad to see the images of the burning #NotreDameDeParis. I hope that the Paris fire brigade will get the fire under control as soon as possible. My thoughts are with the people of France as a masterpiece of European gothic is at risk of being destroyed.

Have just come away from the bank of the Seine after the spire fell as I can’t bear to watch any more. Fearful for anyone close to the flames, and aghast that centuries of history & beauty could disappear into smoke so fast pic.twitter.com/yxIVBz9RAn

Absolutely heartbreaking to see the Notre-Dame Cathedral in flames. Canadians are thinking of our friends in France as you fight this devastating fire.

London stands in sorrow with Paris today, and in friendship always. #NotreDame pic.twitter.com/jc6z0Oc2P3

It’s not just a magnificent building, and not just an icon. It’s repository of world renowned art. Horrible to watch it burn #NotreDame pic.twitter.com/oj3pARuFPj

My heart goes out to Paris. Notre Dame is a symbol of our ability as human beings to unite for a higher purpose—to build breathtaking spaces for worship that no one person could have built on their own. I wish France strength and shared purpose as they grieve and rebuild.

Just seems such a huge, heartbreaking fire. Hope nobody is hurt, first & foremost. And aside from that, as anyone who has visited knows, it’s such a stunning cathedral. #NotreDame pic.twitter.com/GSoySswJ3w

Cathedrals are so vulnerable, yet they’ve been standing for so long, we tend to think they’ll last forever.Whatever our faith they are the most beautiful awe inspiring buildings we’ve got. Fingers crossed for the people of Paris that this fire isn’t as bad as it looks #NotreDame

Notre Dame Cathedral is one of the great structures of the world. It is a work of architectural and construction art. So much intricate detail and history. It is absolutely tragic what has happened to it today. #NotreDame pic.twitter.com/d5XudkJVoM

Our thoughts and prayers are with all those affected by the devastating fire at Notre Dame Cathedral, Paris, particularly in this time of Holy Week.

A crowd of people kept vigil over the Catholic cathedral, some singing the prayer to “Our Lady” to whom the building was dedicated.

Parisians sing as their beautiful cathedral tragically burns. What an awful day for the City of Lights #NotreDame pic.twitter.com/6qYtR2z1w0

Actor and writer, Mark Gatiss made an important point about what we should learn from the tragedy.

I hope the terrible news from Paris serves as a wake up call re the Palace of Westminster which is an inferno waiting to happen.

The thirteenth-century building had survived war, revolution and the ravages of time, but will fire now be its undoing? Historian Dan Snow believes not.

It's overwhelming but remember that York Minster and Hampton Court burned in the 80s, Windsor Castle in the 90s and Cutty Sark in the 00s. Dresden's Frauenkirche, the Catherine Palace…. What we build, we can rebuild. Their essence endures.#NotreDame will rise again.