In case you missed it, Nigel Farage has launched his new pro-Brexit party – called The Brexit Party, obviously – in time to campaign for seats in the European Parliament. If you thought that was ironic, wait till you find out about Barry and Diane …

Barry & Diane are so loyal to Nigel Farage they came back from FUCKIN’ BENIDORM to back his Brexit party. The thundercunt is strong with these two. pic.twitter.com/IDnz2q3JEK

We’re not entirely convinced they’ve thought this through. Naturally, there were a lot of stunned and scathing reactions.

A couple who flew over from their home in Benidorm to support Farage, rallying against the very institution they owe their sun kissed, cushy lifestyle to while wearing naff anti EU badges is quite possibly the most Brexit thing you will ever see.pic.twitter.com/vIzzkWGRTY

Imagine flying back from Benidorm to join a campaign to remove your own freedom of movement pic.twitter.com/kqU41yDRGw

If Brexit comes to pass may they find themselves deported then forced to live in the rain, in a tiny damp flat and on a shit pension that doesn't even cover the essentials. That's what this level of twattery richly deserves.

The New Brexit party launch today, Nigel Farage said, " We're going to attract a mixed and diverse cross section of society. " See below a picture of Barry and Diane who flew over from their home in Spain to join, says it all really pic.twitter.com/0GlgmjPpQH 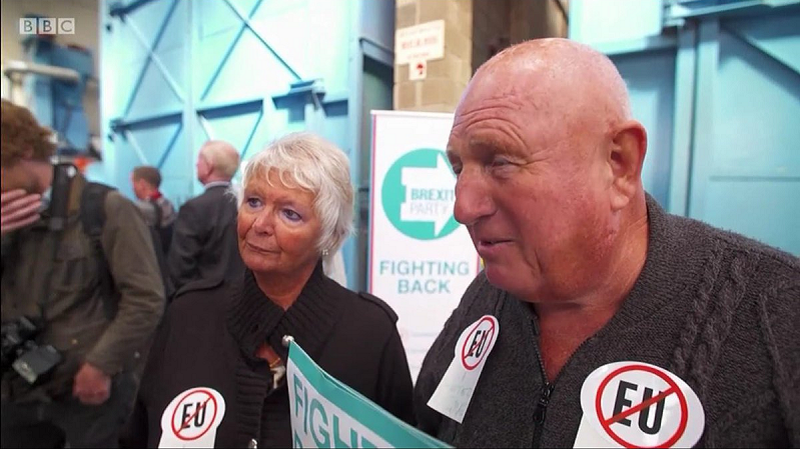 These two live in one of the EU member states and wear anti-EU badges. How many brain cells do they have between the two of them?

Absolute fuckwits, these are the ones you just cannot reason with, the ones who always know better. The ones who have had everything given to them on a plate. The most pampered generation ever!

I think these guys are great- they believe in something so strongly that they are prepared to give up their own home and lifestyle for it…oh hang on… they haven’t thought this through fully have they… ‍♂️. Still, I’m sure they’ll be fine – they’re ex-pats not immigrants.

HAHAHA look at them, with their white hair and orange faces. 'We hate young people! We're a pair of mean old ladder pulling arseholes!'

One human I will never be able to fathom: The Spanish expat Brexiter. What utterly weird tossers https://t.co/hCyZojGXjm

The really sad thing about this is, as current Spanish residents, these people may be allowed to continue to live in Spain with similar rights to what they have now if some reciprocal arrangement is reached, but subsequent generations won't benefit from such an arrangement. https://t.co/Q1eaEK4mOC

Author, Sheila O’Flanagan, confirmed that Barry and Diane aren’t the only confused Brits in Spain.

I’ve met quite a few Brits living in Spain who voted leave. Their view is they’ll be fine in Spain afterwards as the spanish won’t want to lose them and their money (most are pensioners using the health system…)