The subreddit ‘murdered by words’ is a source of constant delight and they don’t come much better than this.

It was shared by Redditor mellowmsn who headlined it ‘Sorry Americans’. And this is why. 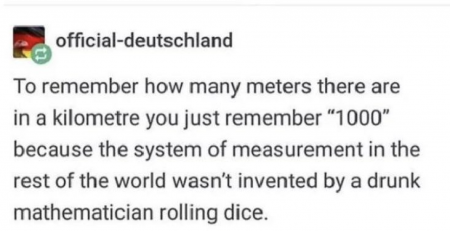 No coming back from that. And some of our favourite things people said about it.

‘I’m American, and I agree with you all the way. Why are we like this?’ cole_fibbler

‘We actually tried switching to metric once but nobody liked it.’ AppleLord56

‘Imperial has cost us millions in space missions.’ D_a_l_t_o_n

‘Cost $125M alone when the Mars climate probe crashed due to a conversion error.’ MyAntibody

‘However, on September 23, 1999, communication with the spacecraft was lost as the spacecraft went into orbital insertion, due to ground-based computer software which produced output in non-SI units of pound-force seconds (lbf·s) instead of the SI units of newton-seconds (N·s) specified in the contract between NASA and Lockheed. The spacecraft encountered Mars on a trajectory that brought it too close to the planet, and it was either destroyed in the atmosphere or re-entered heliocentric space after leaving Mars’ atmosphere.’ arfior

next story
Breaking News: 14 terrible landlords who perfectly sum up the nightmare of renting