Some people aren’t happy that the Queen has given royal assent to Yvette Cooper’s bill stopping a no-deal Brexit.

When we say ‘some people’, we mean people like this.

A bill to cancel democracy has received Royal Assent. UK is a joke. https://t.co/uddbIj5H8G

BREXIT: Well, I have to admit, I didn’t see ‘the Queen is a traitor’ coming… pic.twitter.com/ELkLK7F15y 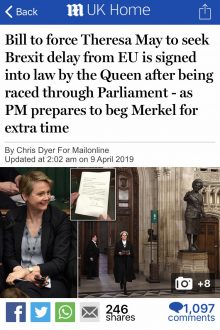 And this is what they had to say. 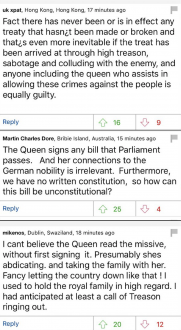 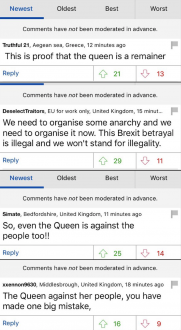 And here are some of our favourite responses it generated after they were shared by the great @DMReporter on Twitter.

“Someone should have hidden her pen” is possibly the greatest single line of comedy ever written.

Someone should tell them about the rarely-enacted Sovereign Defamation Act of 1376 that makes it an offence punishable by being broken on the wheel to publicly accuse the sitting monarch of treason.

I mean, it’s not like any of them would check.

I love the comment that “We need to organise anarchy”. Rather like when Willie Whitelaw accused Harold Wilson of “stirring up apathy”.

I’m french and i find these comments hilarious. Also sad. But mostly hilarious.

So, not understanding the role of the apolitical Queen then