You’ll remember the widespread outrage that greeted Channel 5’s so-called efforts to put crisps in some sort of order.

According to the British public, this is the #official crisp pyramid. Have any of your faves been snubbed? pic.twitter.com/Y7dNsPwqy5

Well now they’ve done something similar with chocolate bars and, well, just get a load of this, as shared on Twitter by the great Scott Bryan.

Following Channel 5 CRISP-GATE, I decided to watch all their other snack Countdown shows to see whether they get it wrong the other times too.

Here is the chocolate one. It is carnage. pic.twitter.com/hkvvbjTzyf 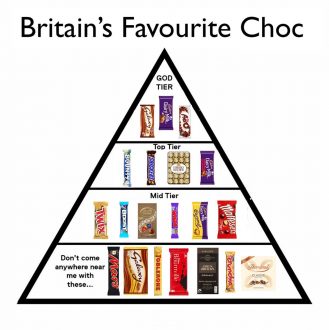 And here’s exactly what people made of that.

“What you up the weekend ordinary British person?”
“Oh, not much. Just gonna watch Mrs Brown’s Boys, eat a couple of ferrero rochers and vote for Brexit.”

And people honestly wonder why we’re fucked as a country.

I have never seen such a mess in my life

Fucking hell. Crunchie has been mugged off there.

This is absolute bullshit. Crunchie is the best chocolate. End of. https://t.co/Fy5ocBkID2

This country continues to deserve Brexit.

How can any self-respecting human put Bounty that high? https://t.co/JYUVNQf6JP

What the fuck is this mess?? Shut Channel 5 down IMMEDIATELY. And look into executing whoever voted for this complete disgrace. Cheers, son's crying https://t.co/o0x6PgAuaI

Ferraro Rocher in the Top 5 whilst Green & Blacks and Mars are near the bottom? What?!

I feel like even a dry ass Ryvita is superior to Bounty.

And don’t even go here.

I then decided to watch the Channel 5 Britain’s Favourite Biscuits show.

And you can follow Scott for loads of top telly-related stuff here.