Sad news today that Bill Heine has died aged 74. And if you don’t know his name, you’ll certainly know his shark, because the former BBC Radio Oxford presenter was responsible for the city’s famous fibreglass artwork, the Headington Shark.

You remember, the one sticking out of his roof. 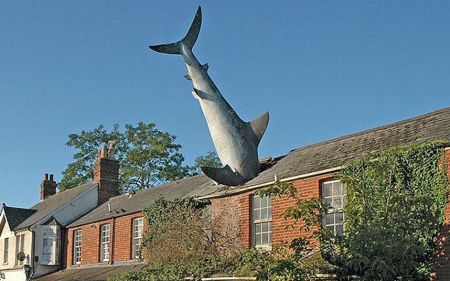 Bill had to fight to keep it though, and we’re grateful to the Guardian’s Jim Waterson for sharing this excerpt from the government’s final ruling on the matter, which is just brilliant.

Bill Heine, the man who in 1986 stuck a giant shark on the roof of his terraced house in Oxford, has died. He fought planning officers all the way to the top for the right to keep it. The government’s final ruling is thing of beauty. https://t.co/dpgRGxFrN1 pic.twitter.com/XG8xIIwoz2

And because that’s so tricky to read, here’s the bit in blue all over again.

‘The council is understandably concerned about precedent here. The first concern is simple: proliferation with sharks (and Heaven knows what else) crashing through roofs all over the city.

‘This fear is exaggerated.

‘In the five years since the shark was erected, no other examples have occurred. Only very recently has there been a proposal for twin baby sharks in the Iffley Road.

‘But any system of control must make some small place for the dynamic, the unexpected, the downright quirky. I therefore recommend that the Headington shark must be allowed to remain.’

And here are a few of the things people had to say in response to the post, inclusion memories of the shark and the man himself.

Sad news. Defending this shark was the only student politics issue which now seems to have been worthwhile.

I remember getting the bus to Headington and just staring at it for ages and enjoying how everyone local was completely used to it.

My dad had a poster of that in his office, where he worked as a planner.

I would have loved to be inside Bill Heine's brain the moment this idea came to be an idea. Its not just Art its a symbol of eccentricity, human spirit and inventiveness and plain out and out why not for the hell of it. I salute you Bill Heine. #billheine

Literally the best thing about Oxford in years. I remain baffled at the utter joylessness of people who couldn't enjoy a shark in the roof of a terraced house. RIP Shark Man. https://t.co/fch5zI5hW9

Bill Heine was also the pioneer of independent cinema in Oxford. The Penultimate Picture Palace saved my life as a teenager from the Odeon tyranny. The ladies' and gents' loos had the signs "Pearl" and "Dean" over them.

He was also responsible for the famous legs on top of a cinema in Brighton. pic.twitter.com/C3TMibzGwz

This is Britain at its best https://t.co/GsZSJAig0w

next story
Breaking News: Mexicans want to close the border with the US because of Covid-19 and this is the only response you need