We’re grateful to a woman called Muffy who shared this Tinder profile on Twitter.

The first in an occasional new series, it’s our Tinder profile of the week. It’s the last line that really seals it.

The search is over
I’ve finally found ‘The One’ pic.twitter.com/zvJlM0ORgp 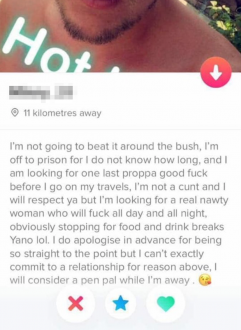 What a catch. Shall we go two's up

"will consider a pen-pal"

Seems a decent upstanding member of the community

He’s better than most of the creeps on Tinder! At least he’s honest is his profile

I think this guys going to prison for stealing all my moves https://t.co/1uW9hMyMd4