A mere two days after being welcomed back into the bosom of the Labour party after 34 years in the wilderness, controversial political figure, Derek “Degsy” Hatton has been suspended. It happened after an old tweet came to light, which was far from a good look with the recent and ongoing anti-semitism row.

Derek Hatton thinks Jewish people are responsible for the actions of the Israeli state. I suspect there's a lot more. pic.twitter.com/HEpbQNuOdj 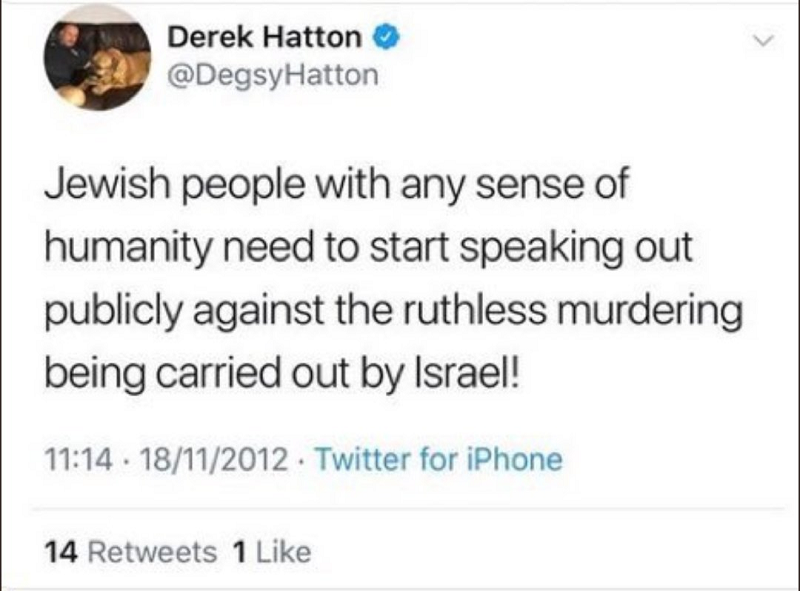 Does “shambles” cover it? https://t.co/eTiGuoWSmU

If this had happened at any other time, it would have been huge news, but with the political turmoil we see every day, it was virtually a footnote. That didn’t stop Twitter from chipping in with a few jibes, however. These are our favourites.

You can leave, you're Hatton https://t.co/uDaO2SxpZ9

FFS at least give us time to write the jokes.https://t.co/JA3jfzH7c1

My commiserations to Rachael Swindon and Aaron Bastani who leapt on the Hatton bandwagon prematurely.

Is there a bookend to this tweet Aaron? Do you salute him again on the way out? https://t.co/xC3PysiHWI

Several people gave a nod to Hatton’s past, when he sent redundancy notices to 30,000 council employees by taxi.

I wonder if he was notified by taxi. https://t.co/SYmayf6gWB

It looked very much like the Labour Party had decided to be more like comedy writer Nick Pettigrew‘s mum.

Derek Hatton knocked on our door in the early 80s while canvassing. My mum said “You only come round here when you’re after something. Fuck off, Derek” & slammed the door on him.
Labour Party – be more like my mum.

However, in an update that will surprise nobody …

Derek Hatton, hearing that Labour may have to re-re-admit him, because it can't lawfully suspend him for activities while he wasn't a member… pic.twitter.com/UbNHoef7Lw