As the UK haemorrhages jobs, it was dealt another blow with the news that Honda’s Swindon plant is to close in 2021. The company cited various reasons, including global economic markets and the necessity to create more electric vehicles, but interpreters couldn’t help but suspect the B-word might have had some influence – and I don’t mean ‘bikes’.

Right-wing columnist, Julia Hartley-Brewer weighed in with her definitive pronouncements that Brexit had nothing to do with it – presumably based on her extensive experience of the UK car industry, including making this statement.

Oh look. Why Honda is set to shut its Swindon factory – written by people who actually *know* about the car industry. Spoiler alert: they make diesel cars at that factory & no one wants to buy them anymore. https://t.co/KT6QQbTHtx

It wasn’t the clincher she might have hoped, as people pointed out.

Literally the first line of the second paragraph reads:

#Honda famously one of the last mainstream brands to even bother putting a diesel engine in a car and still one of the smallest producers of diesel vehicles are closing a plant that makes 95% petrol cars due to people not buying diesel cars. OK Julia. https://t.co/EALqerOOxz

Among many others, she got this clear reply.

Never a fan of being corrected, she attempted to swat him away.

Read the article. The author may know more than you.

But Dany had an answer for her – and it was a zinger.

“I sincerely doubt it as I worked there and know the exact numbers of exports in EMEA and other markets.”

But …but, she read the article – paragraph one, anyway.

Writer Otto English captured the moment and shared it for posterity.

Burn of the day. You may wish to put on protective clothing first pic.twitter.com/FAYCDUdy1H 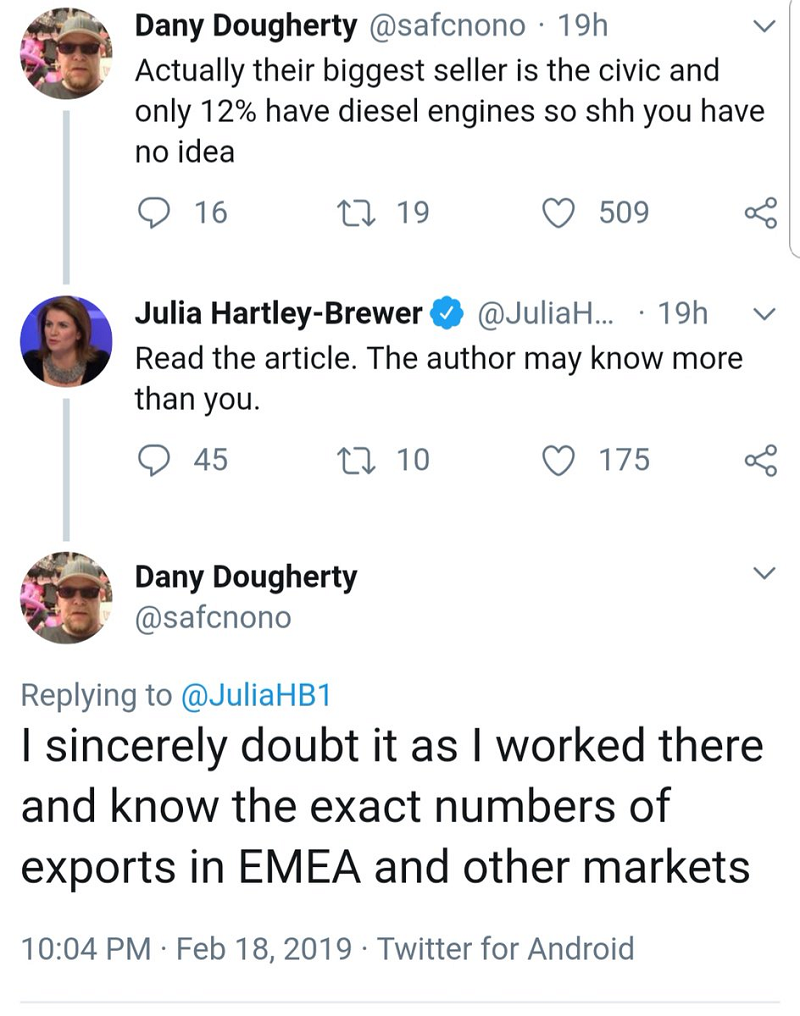 People loved seeing her bluster come to nothing.

Sometimes she makes it so easy

Wow. You can surely see that from space.

Ouch! Serious burn! @JuliaHB1 excusing herself from the @talkRADIO office after reading that tweet… pic.twitter.com/EdmJSITbKN

It's almost as if she doesn't know what she's talking about.

next story
Breaking News: Eric and Donald Trump Jr cried as their father left the White House - 7 favourite reasons why