MEP for the North West of England, Steven Woolfe, was once one of the poster boys for UKIP until a series of embarrassing events, including missing the deadline for UKIP’s leadership race and being involved in a fist fight with a fellow UKIP MEP. He now sits as an Independent – making him something of a trendsetter, if recent events are anything to go by.

When the news broke that – now former – Conservative MP, Anna Soubry had quit her party to throw in her lot with the new Independent Group in Parliament, Woolfe took to Twitter to throw down a gauntlet. 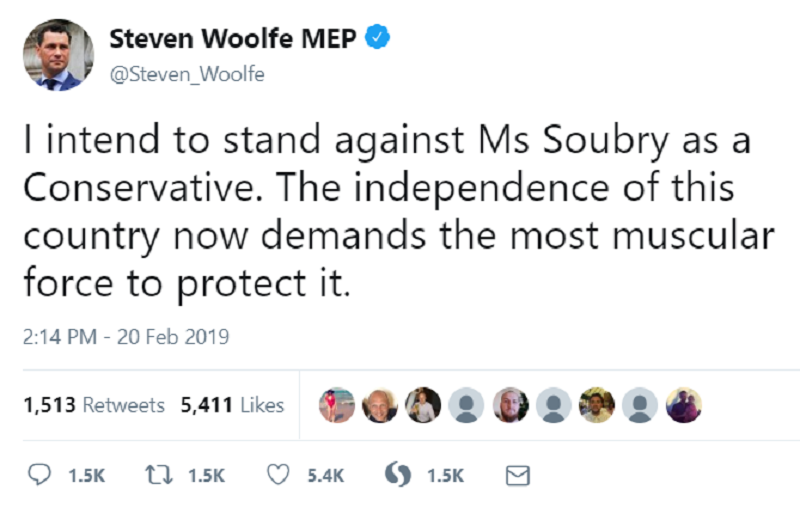 His bizarre announcement was largely met with scorn, as these reactions show.

“most muscular force”!! for a bloke who got decked by one of his own party colleagues, and then threatened to sue me and did nothing, i’d give this a 1 star in the muscularity ratings. https://t.co/KkDJaS8alU

You're not in the Conservative party and haven't been selected. It's like me announcing that my world beating Cheddar will win the global cheese awards https://t.co/W8bIo12rfO

I also want the moon on a stick, son, you got to be a Conservative Party member first, then you must be selected, and I don't think they look too kindly on people who have brawls in public, especially if they lose badly https://t.co/1hF8ewTGC3

‘The most muscular force’? What are you going to do? Wrestle her?

Most stinging of all, the Conservative Party’s official headquarters made its own statement …

Sorry @Steven_Woolfe that is not possible as your membership request was rejected last year. https://t.co/XhZagwzfpZ

Now that’s got some muscle.