We’re grateful to someone called Adrianne Peltz for sharing this bridal magazine’s tips for happy couples who might not be sure what to get up to on their wedding night.

They went viral because they struck most people as exactly the sort of thing you probably shouldn’t be doing on your wedding night. Do they just need to get out more – or are these the worst wedding night tips imaginable?

And just to set the scene, the bit at the start where it assumes this is the first time the couple will have had sex, is probably the least weird thing about it.

I can’t stop thinking about this wedding magazine article about your wedding night, that (amongst others) legit suggests making a sex tape: pic.twitter.com/M4Gq47nVN2 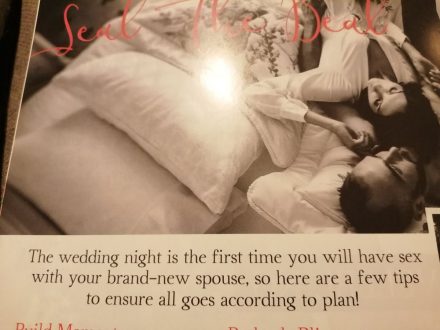 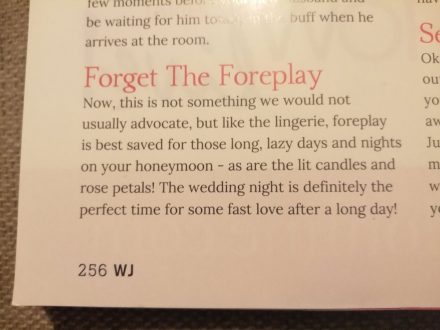 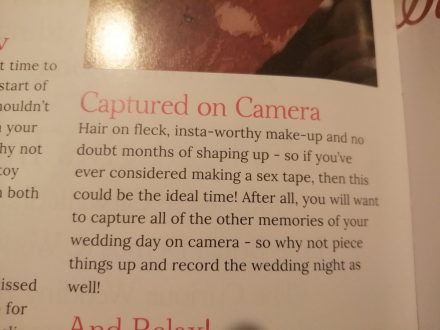 And just in case any of that’s tricky to read, here it is again.

The wedding night is the first time you will have sex with your brand-new spouse, so here are a few tips to ensure all goes according to plan!

Now, this is not something we would not [sic] usually advocate, but like the lingerie, foreplay is best saved for those long, lazy days and nights on your honeymoon – as are the lit candles and rose petals! The wedding night is definitely the perfect time for some fast love after a long day!

Hair on fleck [sic], insta-worthy make-up and no doubt months of shaping up – so if you’ve ever considered making a sex tape, then this could be the ideal time! After all, you will want to capture all the other memories of your wedding day on camera – so why not piece things up [sic] and record the wedding night as well!

Like the wedding night, the various spelling mistakes suggest the whole thing was done in a hurry.

Here are some of our favourite things people said about it.

The important thing is your hair looks nice and there’s no foreplay.

I screamed when I read that… save foreplay for the honeymoon, orrrrr get a divorce ‍♀️

Just stick it in. But film it.

The first shag you ever have is a quickie on tape? What fresh hell is this?

I’m so intruiged by the type of person who remains a virgin until their wedding night, but yet has always dreamed of making a sex tape.

The heterosexual men are at it again

‘hair on fleck’ and ‘so why not piece things up’ …was this translated from another language at a magazine that has no editors?

Oh I missed this memo! I spent my wedding night on the floor of our bathroom puking after drinking a bottle of tequila. I wonder should I have recorded that?!

And someone thought they found where it was from.

Is it from this? pic.twitter.com/9n0yFt8rFA

This person had a theory.

We’re with this guy.

This says your wedding night is the first time you’ll have sex, and then suggests you make a sex tape of it?! https://t.co/0bh46pMpP1

And just in case you were wondering, here’s how it plays out in real life.

"I've been drinking all day, I'm knackered, I'm annoyed at my dad for that weird thing he just had to fucking say in the speech didn't he, my feet hurt, shall we make a sex tape?" https://t.co/m2z8YYUhNO