Global Britain, yes, of course! Why didn’t we think of that? Except, er …

But the best bit was when people unearthed an old tweet – well, not that old, actually – when Hartley-Brewer said this. 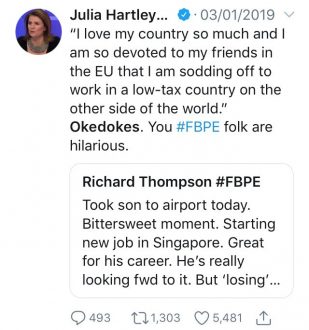 We believe that’s called a ‘self-own’.

A month ago you were attacking someone for going to work abroad. But Dyson sending jobs abroad you appear to think is a hoot. pic.twitter.com/YcTFYqGoHT

No I didn’t. I mocked someone for claiming that their son’s move to the other side of the world had anything to do with Brexit when it clearly didn’t.

So will you condemn Dyson for moving his business to Singapore? Which has a new trade deal with the EU? Which benefits him, not British workers?