Everyone wants to know what happened next in the life of the woman who wrote this romantic confession on an airplane’s sick bag she found in the seat in front of her.

Yes, you read that right.

There was no wifi on the woman’s flight – she’s 21 and called Andrea – so she thought she’d use the opportunity to get something off her chest, old school style.

Now it’s been shared on Reddit after it was found in the back pocket of a seat by a cleaner and it’s gone wildly viral because, well, have a read for yourself. 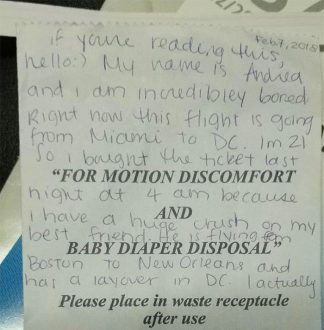 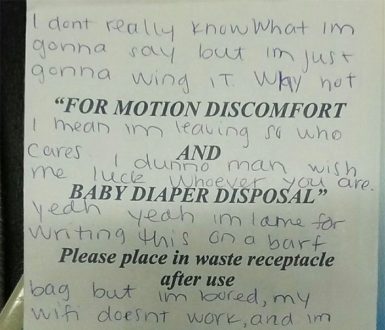 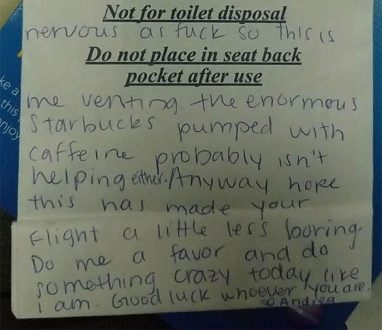 And just in case that’s a little bit tricky to read, here’s what she had to say.

If you’re reading this, hello :). My name is Andrea and I am incredibly bored. Right now this flight is going from Miami to DC. I’m 21.

So I bought the ticket last night at 4 am because I have a huge crush on my best friend. He’s flying from Boston to New Orleans and has a layover in DC. I actually live in DC and was gonna go up soon anyway so I thought why not, I’ll surprise him at the airport during his layover. I’m gonna tell him I have a crush on him.

Bold move right? But see I’m going to Australia for a semester abroad in 4 days and I won’t see him for 5 months so it’s really the last chance I have.

I don’t really know what I’m gonna say but I’m just gonna wing it. Why not I mean I’m leaving so who cares. I dunno man wish me luck whoever you are.

Yeah yeah I’m lame for writing this on a barf bag but I’m bored, my wifi doesn’t work, and I’m nervous as fuck so this is me venting. The enormous Starbucks pumped with caffeine probably isn’t helping either. Anyway hope this has made your flight a little less boring.

Do me a favour and do something crazy today like I am. Good luck whoever you are.

And here are a few of our favourite responses on Reddit. 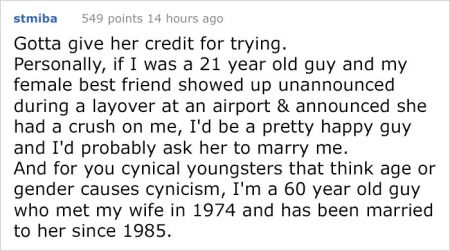