There’s a Twitter account called Progressive Dad Foundation and it went viral when it shared this ‘experiment’ it did with the Kinder Surprise Eggs in their kids’ stockings.

Readers of an especially sensitive disposition might like to scroll past the picture with their eyes closed.

My partner’s kids got Kinder Surprise Eggs in their Santa stockings. I swapped out the toy for a duck heart & liver. They were horrified when they saw it – opened up an amazing discussion about the ethics of meat consumption. #Vegan #MerryChristmas pic.twitter.com/9wRdY7Kbsx 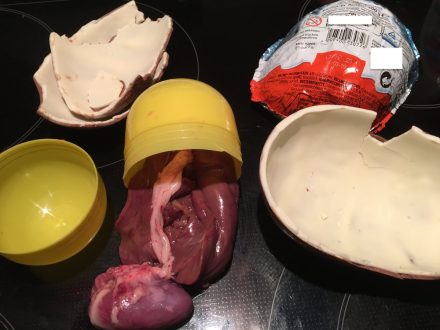 And it prompted all sorts of furious responses. Like, really furious.

So could’ve had this discussion on any other day but you chose to make it about you rather than letting them enjoy their Christmas. Interesting.

“And now, to tweet this and be congratulated for my brilliant idea.”

People who think horrifying children is the best way to initiate conversations with them should absolutely never be granted access to children. https://t.co/mvWv8ysq0e

so you let a heart and liver go to waste just to make a point? what are the ethical implications of that?

You're the reason nobody takes vegans seriously you fucking danger https://t.co/XuqKSaNET5

can u imagine being smug enough about traumatizing children with raw duck organs to tweet this https://t.co/8Q6qV0W5HV

Contacted child protective services in Philadelphia this morning and are very keen on finding this person and investigating. They’ve contacted Twitter for help. If you have any more details here is the info https://t.co/73f1dRTPac

Alexa, how do you ruin your kid's Christmas? https://t.co/Kt6CBr7uz9

Except, as this person pointed out on Reddit, we’re pretty sure it’s a parody account and really not to be taken seriously.

Which either makes the whole thing even better or a complete waste of time.

Guys this is obviously a parody account quit being so mad https://t.co/0aKiCUAr3J