Someone called Chris Walker spotted some racist graffiti in his neck of the woods and thought he’d do something about it. 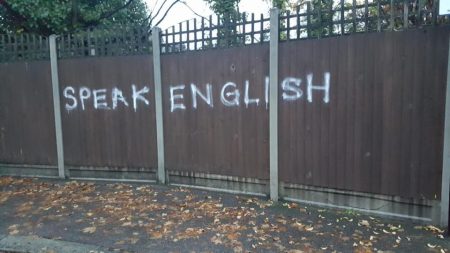 And this is what he did.

I can only assume our local 'artist' was spooked before he could finish his masterpiece. Allow me to finish it for you #lovewalthamstow #E17 @stellacreasy pic.twitter.com/KeaGJkpD4t

Chris’s handiwork went viral and here are just a few of the responses it generated.

This is great. Someone turned some racist graffiti in Walthamstow into something a lot more welcoming. pic.twitter.com/08CVAUjqta

The remix is better than the original. https://t.co/WzERoYgKEO

This is amazing, this man is a modern day hero. https://t.co/9J4I29DCIx

Chris decided to do something about it after someone tweeted the graffiti which has been appearing around Walthamstow (hence the reference to the constituency’s local MP, Stella Creasy).

In response to nasty racist "SPEAK ENGLISH" graffiti popping up around #Walthamstow, Queens Boundary Community's hosting an event this Sunday to show solidarity & unity against racism plus an opportunity to strengthen friendships between neighbours of all cultures (contd) pic.twitter.com/t9a7ZcHFQU

And people shared other examples of times graffiti was turned on its head.

My favorite from Dublin a couple of years ago. pic.twitter.com/lCyerKN3US

Except someone pointed this out.

I think it is spelt punjabi. Good effort though

Sorry for the typo! Blame the Waltham Forest website! pic.twitter.com/i8ZzCCWu6f

Just in case you were wondering …

This is the best thing ever. ❤️