So @ShitJokes on Twitter does exactly what it says on the tin. It shares shit jokes.

But some of them are also really rather funny, and here are a few of our recent favourites… 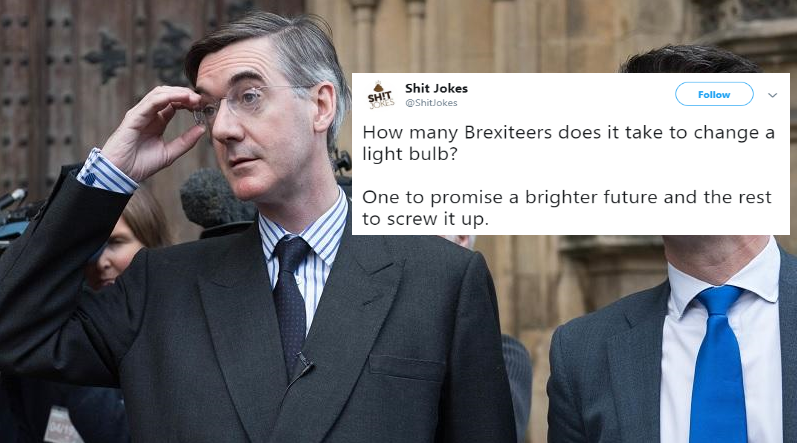 My girlfriend asked me to stop singing I’m a believer by The Monkees, because she found it annoying. At first I thought she was kidding.

But then I saw her face.

Why aren’t people in the Afghanistan allowed to watch TV?

Because of the telly ban.

My grief counsellor died the other day…

But he was so good I didn’t give a shit.

My Granddad just walked into my room with a young guy wearing skinny jeans and eating avocado toast.

I got a lift to the eleventh floor, and as I got out, the operator said “Have a good day, son.”

He scratched his head. “No, but I brought you up, didn’t I?”

What do you call a bulletproof Irishman?

Some guy just said he was going to attack me with the neck of a guitar.

Leviticus 20:13 “If a man lies with another man he should be stoned.”

A weasel walks into a bar.

The Bartender says, “Wow, I’ve never served a weasel before. What can I get you?”

My wife laughed when I said I still had the body of an 18 year old.

Until she checked the freezer.

Just spent £300 on a limousine and discovered that the fee doesn’t include a driver.

I went into the cake shop earlier, bloke said “all cakes £1.”

I was walking in a cemetery this morning and seen a guy hiding behind a gravestone.

He replied, “No, just having a shit.”

A vegan said to me people who sell meat are disgusting.

I said people who sell fruit and vegetables​ are grocer…

You should’ve seen her face!

And here’s our previous round-up of Shit Jokes