Dominic Raab, the head of the Department for Exiting the EU, wrote a letter stating that he expects a Brexit deal to be finalised by November 21st. 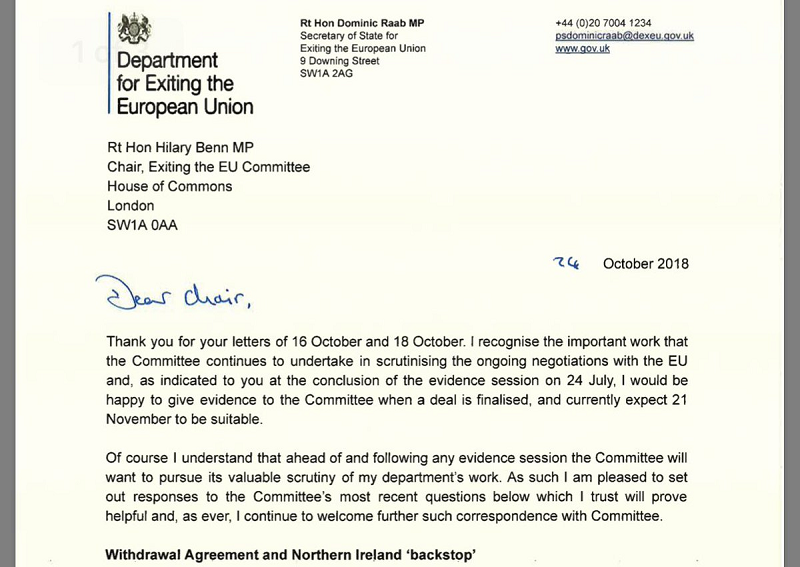 This basically means that he has three weeks to invent the technology required to make the UK’s plan for the Irish Border workable. It seems a tad ambitious, but who are we to pour scorn on his plans when his own department is ready to do it?

Dominic Raab may have been a little over eager in his wording. His department have just issued an urgent statement… pic.twitter.com/DfiHDCA6YB

Of course, the Brexit Department weren’t the only ones feeling doubtful.

So Dominic Raab wrote to MPs today to say he thinks a Brexit deal will be finalised by 21st November.

Fairly soon after his department released a statement to say it was a mistake and that “there is no set date for the negotiations to conclude".

I can't decide which part of this is more unlikely: that a deal will be reached by November 21st, or that Dominic Raab thinks. https://t.co/PSP6H6dGeb

Dominic Raab said he's organising a party in his local brewery. His department issued a statement saying he couldn't. Shambles doesn’t even begin to cover it. https://t.co/mDnsbLNHGb

So it turns out that the man responsible for negotiating Brexit cannot even negotiate attending a select committee hearing without his department and No10 having to clarify what he means 🤦🏻‍♂️ https://t.co/g1f0wmXVDj

Or to paraphrase, the cabinet has no idea what’s going on. https://t.co/NxWMHJXtKQ

This must be one of the quickest u-turns in political history. @DominicRaab told MPs that a Brexit deal would be done by the end of November. Three hours later his own department was forced to correct the record. What a mess. https://t.co/L0nrbpoqws

Dominic Raab is making David Davis look competent. Which is quite a fucking achievement

In 2011 Raab claimed "feminists are now amongst the most obnoxious bigots", & in 2017 he said "The typical user of a foodbank is not someone that’s languishing in poverty, it’s someone who has a cash flow problem episodically". Not convinced we should listen to anything he says. https://t.co/iFocIVKzWo

Mr. Raab might need to look over his shoulder, because somebody’s paying close attention.

Brexit deal by November 21. We’ll hold you to that, @DominicRaab. https://t.co/1v9bQwZTsd