Well, it’s one way of attracting more vegan shoppers to Waitrose, we suppose.

Just not a very effective one after the editor of Waitrose Food magazine responded to a journalist’s pitch for a ‘plant-based meal series’ by suggesting, er, well, have a read for yourself in his reply published by Buzzfeed. 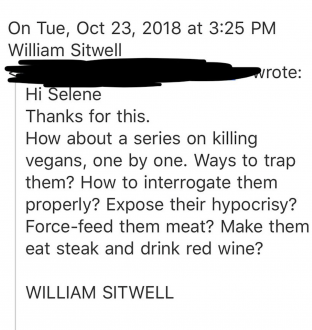 The magazine’s editor, William Sitwell, was replying to food journalist Selene Nelson who had suggesting writing the plant-based meal feature for the mag.

New: The editor of Waitrose Food magazine proposed a series about “killing vegans” and force-feeding them meat after a vegan freelance journalist sent him a pitch https://t.co/qxQ0EG9U3S pic.twitter.com/PV43Oi7TH9

“I’ve never seen anything like it. I’ve written about many divisive topics, like capital punishment and murder cases and domestic violence, and I’ve never had a response like that to any of my articles or pitches.

“And he’s the editor. He’s representing Waitrose and he’s talking about ‘killing vegans, one by one’?

“If William Sitwell wants to continue eating meat and hating vegans, that’s his prerogative, but to have this attitude towards others when he’s representing Waitrose is seriously bizarre.

“I wasn’t telling him to go vegan, or not eat meat, or that it’s bad to – I was just suggesting including some more plant-based recipes in the magazine.”

And here’s what Sitwell said in reply.

“I love and respect people of all appetites be they vegan, vegetarian or meat eaters, which I show week in week out through my writing, editing and broadcasting. I apologise profusely to anyone who has been offended or upset by this.”

Over to you Waitrose, who had this to say.

“Even though this was a private email William’s gone too far and his words are extremely inappropriate, insensitive and absolutely do not represent our views.”

Not everyone thought so, though.

Man makes not brilliant wisecrack at vegan's expense. Vegan proves suspicion that they are humourless and dour. Buzzfeed writes it all up. Well done everybody. https://t.co/92nELjsR5R

Just most people. You can read the whole Buzzfeed story here.