What’s occurring? This is a very tidy takedown of Katie Hopkins

Katie Hopkins was on the lookout for Welsh parents whose children were banned from speaking English in school. 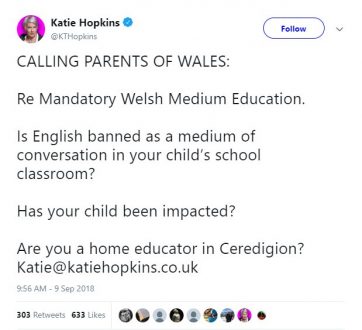 So @WelshFanZoneTV thought they’d get in touch to help out. Sort of.

Now that’s probably tricky to read so here’s the meat of it.

Hi there Katie, I love your work. I seen your tweet about the English language being banned in Welsh schools and it really hit home. My son Smithy is currently being bullied as he is the only one in his class that can’t speak Welsh. He always feels left out and comes home in tears most evenings.

Even when his best friend Gavin tries to speak to him in English he gets told off for it. I complained to the head teacher Miss Jenkins numerous times but she doesn’t seem to care …

And it was exactly the sort of thing Hopkins was after.

So sorry to hear this. Can you move to an English medium school? So hard for you. Please may I ask… can I share the content of your email. I think it would help other parents. You are not alone.

I want to let you know that I do not have a son and if I did I would like to think he wouldn’t be called Smithy. The names I gave you are characters from legendary TV series Gavin and Stacey …

I hope this can be a lesson to you to not believe everything you read on the internet. Now please do everybody in Wales a favour and hop your hateful ass back in your racist-mobile and drive it back across the Severn Bridge and never come back.

Your opinion on our country and our beautiful language is irrelevant and certainly not welcome, also if you are going to try and lecture other countries on their language at least learn to spell your own first.

I cannot believe you left out Bryn and Doris.

Hahahahaha has she responded to ur last message?