There’s not much that unites the country these days but at least everyone could agree that it’s utterly unacceptable to harass the children of politicians after this happened to the family of Jacob Rees-Mogg.

Protesters have confronted Jacob Rees-Mogg and his family at their London home, warning his children that "lots of people hate your daddy, do you know that?" Are politicians fair game for direct-action activists? Watch ▼@Jacob_Rees_Mogg | @MoggMentum | https://t.co/sv3MZUm41c pic.twitter.com/79BIITXk5U

It’s ok to hate a child’s father.
It’s not ok to tell a child that you hate their father.

Whatever your politics, don’t be an arsehole.

The video of people targeting the Tory MP was posted on Facebook by a group called Class War and one of the people heckling him is veteran anarchist Ian Bone.

Someone did a bit of digging and found this account of a wedding Bone went to 6 years ago and it’s, well, have a read for yourself. 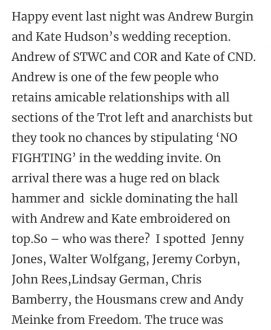 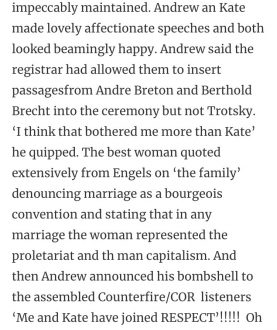 They should put ‘no fighting’ on every wedding invite.

“The best woman quoted extensively from Engels denouncing marriage as a bourgeois convention & stating in any marriage the woman represented the proletariat & the man capitalism” Romantic!

On the other hand …

Just randomly tweeting out to 50,000 followers that you think the wedding of two complete strangers was tacky, that's totally normal behaviour which is in a different box from the "online abuse" box. https://t.co/ju8K3v3ie7

Sounds like a nice wedding. Two people celebrating they way they wanted with their friends. Not sure why there are so many replies laughing at it.

It featured a hammer & sickle.

This account of a hard-Left wedding — written by the man who shouted at Jacob Rees-Mogg's children, and featuring Jeremy Corbyn — is everything you could wish for https://t.co/ObhbpdFvEH

This is truly something. It's another example of satire not being able to keep up. https://t.co/u6eP0C8cxc

Still, all the best to the happy couple.

This writer’s tale went viral because it’s sad and funny, cautionary and amazing