As if it wasn’t bad enough for a certain type of Doctor Who fan that the new occupant of the Tardis is a woman, the long running BBC1 children’s show has now moved from Saturday to Sunday nights.

When we talk about a certain type of Doctor Who fan, we’re mostly thinking of men who also read the Daily Mail. People like this, in fact, as highlighted by @DMReporter on Twitter.

Surely if anyone’s allowed to change time, it’s Doctor Who? 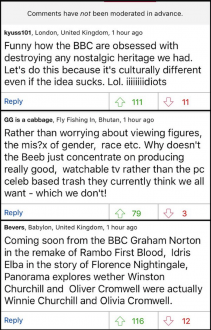 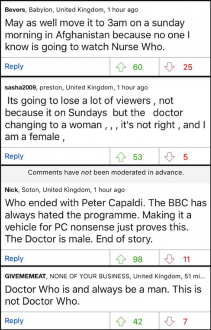 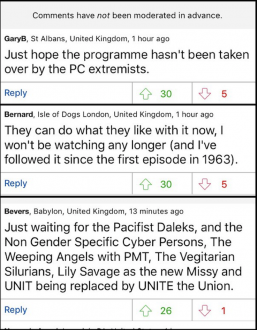 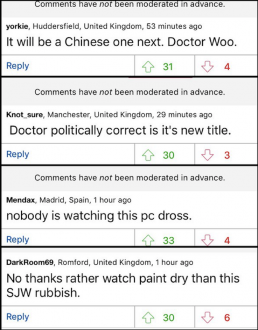 Could be our favourite episode yet.

To be fair, I'd watch a Graham Norton remake of First Blood.

I had a guilty laugh at Idris Elba as Florence Nightingale, I have to admit.

Something tells me Sasha from Preston isn’t actually a woman. Also an Asian Doctor sounds like a fantastic idea.

I love Dr Who. I'd also watch Nurse Who. Great idea! Lets write it! https://t.co/FMZME2xDOO

WHO DO I HAVE TO BRIBE TO GET PAUL O'GRADY AS THE MASTER!? https://t.co/Wv3Bw5kY0V

These people don't deserve Doctor Who.

I hope they're forced to watch 'Ghost Light' on an eternal loop. https://t.co/fqDDPdBjaG

And in the interests of accuracy …

Fun fact: Doctor Who actually moved day multiple times pre-1989; when they really wanted it dead, the BBC moved it to up against Corrie on a Monday. This time, they've put it in amongst Strictly, Countryfile, Bodyguard, Call the Midwife et al, aka the strongest line up they have. https://t.co/x3CxsY0wYw