Well this brings back the memories. And is another reminder, like we needed it, of the passing of time. And, oh, the fact we never really did understand how to play it.

The MasterMind game box people from 1972 reunited for an updated photo and it is awesome. pic.twitter.com/UaeDsjEvhl

Plus, we spent far too long wondering why it wasn’t Magnus Magnusson on the box. 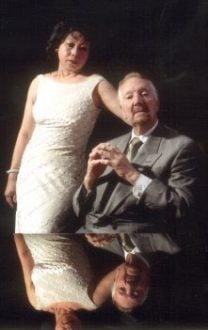 And here’s what other people made of it.

Spent so many hours staring in fascination at this photo as a kid! Who were this sophisticated couple? Cruel husband and mistreated wife? Evil genius scientist and loyal henchwoman? And how did colour-based logic puzzles fit into their nights of sweet intellectual torture?

"Hello, I am a wealthy genius and this is my exotic concubine. Would you care to wager on a game of putting coloured pegs in a plastic board?"

You have to wonder what is the deal here with a ‘distinguished’ dude drumming his fingers and a much younger woman standing over him? The possibilities are endless!

I always though she was his chief assassin

I loved this game. I had Super Mastermind with an alternate cover pic.twitter.com/vMrdWNWYbo

How is that man still alive?

He sadly passed away a few years ago…this “reunion” photo was taken before his death.

I used to have a (knockoff?) version called Master Logic as a kid with a different couple on the cover, having a drink. The guy looked like a friend’s dad and the lady looked like a *different* friend’s mom.

I still have that game. I hate it when people use 2 of the same colour, screws me up every time.

Mastermind was made in my home town of Oadby in a factory just opposite my primary school. Bill Woodward was a friend of my parents. We had this set, a giant version and a multi coloured one too

Turns out the reunion took place in 2003. The man is Bill Woodward, who was the owner of a chain of hairdressing salons, and the woman is Hong Kong born Cecilia Fung, who was studying for a computer science degree at Leicester University.

Here’s what Leicester University said about the picture. Some top detail in here.

A businessman and a University of Leicester student who were brought together 30 years ago as the mysterious figures for the box on the revolutionary new game Mastermind, have been reunited for the first time since that historic day.

Distinguished-looking Bill Woodward was then the owner of a chain of hairdressing salons and young Hong Kong born Cecilia Fung was studying for a computer science degree at the University of Leicester.

Little did they know that the photo session at Leicester studio would produce a result which was destined to cut across all international barriers and become one of the world’s most famous and enduring images.

Bill Woodward was catapulted into global recognition as he went on many promotional tours for the game – in fact even his passport was under the name Mr Mastermind!

He discloses some of his secrets behind the photo-shoot including the fact that he was called upon to sit in only after a male model, originally booked, failed to turn up.

Bill, who despite now being in his late seventies, looks remarkably unchanged from 1972, says that in addition to the photograph that was selected some were also taken with a cat sitting on his lap. The idea was scrapped, but not before the moggy had wet itself on his trousers.

Cecilia said that while strolling in Leicester with friends she was approached by people from an agency who wanted her for the shoot. “I was the usual impoverished student and jumped at the chance,” she says.

Fancy a game, anyone?